Dr. William Harper is an obstetrician-gynecologist in a suburban group practice. He spends much of his time providing prenatal and reproductive health care to young women. Dr. Harper also has a strong interest in public policy and local politics. He has served twice on the city council and is also very active in the local chapter of his political party.

Dr. Harper's colleagues often do not agree with him, but they acknowledge his right to his own political stances and activities. They don't think he attempts to influence his patients' views, but they are sometimes concerned that his highly visible involvement in politics might make patients uncomfortable.

The state in which Dr. Harper practices is likely to have one of the closest races in the upcoming presidential election. He wants to do everything he can to support his party's nominee. His office is located on a busy street in the community, so he decides to place a sign supporting the candidate in his window.

His colleague, Dr. Marsha Robert, first sees the sign upon pulling into the practice's parking lot the next morning. Appalled, she marches directly into Dr. Harper's office to ask him about the sign. "It's going to be a close race, Marsha, and my candidate needs all the support he can get," says Dr. Harper.

"That's fine," says Dr. Robert, "But a physician's office is no place for a political advertisement."

"What do you mean, there's no place for it? Being a physician doesn't preclude me from having political views and making them known. I have a right to free speech too, you know," says Dr. Harper.

"You're right, William, you do have a right to free speech. But don't you think that knowing that you support this candidate—one of the most vocal opponents of a woman's right to choose—will make your patients feel uncomfortable? Don't you think that they'll be less likely to ask you about their different options and more likely to think that you agree with this candidate about women's reproductive rights?" says Dr. Robert.

"Listen, Marsha. My patients know me, and I know them. They know that they can talk to me about anything and that I won't judge them for the choices they make. Just because I support a candidate doesn't mean that I agree with him about every issue," retorts Dr. Harper.

Frustrated and concerned about the sign, Dr. Robert ends the conversation and goes to her office to start the day.

Undoubtedly Dr. Harper does have his free speech rights, but professional ethics requires that he exercise those rights away from his office practice. Considerations related to both his patients and his colleagues would seem to require this.

Dr. Robert suggests that patients might be made uncomfortable by a sign endorsing a prolife candidate. If a bit of psychological discomfort was the whole story, then it would not raise any serious ethical concerns. Should we say, then, that the sign is "offensive"? That might be too strong a description. If the candidate were known to have racist views, for example, and if a Confederate flag were part of the sign, then the sign would be offensive in a morally significant sense. The patients' discomfort is not the only issue of concern, however; there is a risk that patient trust might be undermined perhaps without Dr. Harper's knowledge. This is morally significant enough to warrant removal of the sign.

Trust is an essential part of the patient-physician relationship. Patients need to be confident that their physicians will render medical judgments on the basis of medical science and the best interests of the patient (as an informed and autonomous patient would judge those interests). A reasonable expectation is that physicians will not allow their personal values (eg, religious or political) to contaminate the professional and objective medical judgments patients seek.

Dr. Harper may in fact be quite attentive to this professional norm, never raising partisan political issues with his patients in the office setting. Still, his political sign could undermine patient trust. Many of the women in the waiting room will be pregnant. It is natural that some of them will have anxieties about the status of the pregnancy. His patients might wonder, for example, whether he would fail to suggest prenatal genetic testing when their fetuses might have a significantly increased risks of serious genetic disorders because he does not want to encourage abortions. Many, perhaps most, women would feel uncomfortable raising this issue with Dr. Harper, perhaps because they would feel as if they would be questioning his integrity and clinical judgment. These tensions may result in the patient's losing trust in her physician and being unnecessarily anxious for at least the duration of the pregnancy. This loss of trust can have corrosive effects on the patient-physician relationship, which are difficult to recognize and remedy. Dr. Harper may not even realize if this becomes an issue that he should address.

A defender of Dr. Harper could say that patients who have these concerns can always leave the practice and find another physician. This will be true for some patients; however, for others this is only a theoretical option because either insurance or geographic restrictions make leaving the practice nonviable. Apart from that, leaving a physician imposes additional costs on a patient.

Academics, for example, are in a similar position. If we have partisan political posters all over our offices that relate to issues that we must necessarily discuss in our classes, students will justifiably wonder whether they will be fairly graded if they voice contrary political views. Although the university campus is a place where free expression, especially political expression no matter how controversial, ought to be protected, the classroom and by extension an academic's office are not appropriate places for political campaigning. A political science professor could express her views on the Medicare prescription drug bill in the classroom, but she also has an obligation to present fairly the best arguments of her critics. She must be an educator in the classroom, not a political activist. This is not a threat to academic freedom but a way of protecting the integrity of that value.

Given my analysis, someone could raise the question of whether Dr. Harper must desist from all partisan political activities in public, thereby significantly squelching his political rights as a citizen. The argument would be that this sort of activity could make his patients just as uncomfortable and distrusting as having signs in his office. It seems to me that there is a real and ethically significant difference between these situations. In a public setting, women who are his patients can confront him more directly and comfortably. In that setting they are not "his patients"; they are his fellow citizens. In a well-functioning democracy this distinction is meaningful. There would not be sufficient reason, then, to have abstinence from all political activity as a professional norm.

We need to return to one other issue: this is a group practice. Though the sign is in "Dr. Harper's window," most passers-by would have no sense of that. The conclusion can be drawn that the sign reflects the political sentiments of the group as a whole. This is unfair to the other members of the group who do not agree with those sentiments or support this candidate. Of course, other members could post their own signs, which could correct the misimpressions of passers-by but would only worsen the problem we discussed above. It creates an impression in the public mind that physicians in their professional role as clinicians are politicized. Prudent patients would be more circumspect about discussing medical problems that have become a focus of political controversy with their physicians. This would be potentially subversive of the best interests of some patients, not to mention the professional comity required to serve patients well.

Finally, we have addressed this case as if it were about only physicians. Yet nurses, other health professionals, and office staff in general would all be part of this practice. Would all of these individuals have an equal right to hang partisan political signs in their office space? Would Dr. Harper comfortably approve their equal right to exhibit their political views in this way? We are fortunate, as a society, to have ample political space for engaging in political work in our role as citizens. There is no need for medical offices to be included in that space. How many of us would like to see medical offices become the clone of "talk radio"? 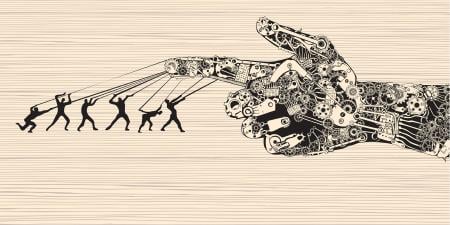