Several clinical and ethical dilemmas arise when caring for refugees with complex, costly, and chronic conditions in low- and middle-income countries where they often first seek asylum. This commentary responds to a case involving a patient asylee with a malignant brain tumor and considers these questions: (1) Should refugee care costs be allocated as a specific amount per refugee or designated to fund only specific interventions? (2) Should interventions not available to host population members with low incomes be available to refugees? (3) Should refugee cancer care focus on cure, rehabilitation, and palliation or on just one or two of these areas? This commentary responds to these questions by considering how to approach trade-offs between numbers of patients treated and per patient expenditures.

MQ is a 63-year-old man of Syrian origin who fled the town of Daraa and sought asylum in Beirut, Lebanon, in 2015. That year, he registered for and received official refugee status with the government of Lebanon and the United Nations High Commissioner for Refugees (UNHCR) in Lebanon. MQ was unable to find work in Beirut, but he still had money in his possession from his life in Syria.

In early 2016, MQ experienced his first tonic-clonic seizure, in which he fell to the floor, his body stiffening and jerking. No factors were recognized as provoking this seizure. MQ previously smoked cigarettes (30 pack-years), but he had no history of prior malignancy. He had no symptoms of weight loss, fevers, or night sweats. At first, he did not seek medical advice for his seizure. In fact, he had not visited a clinic since he sought asylum in Lebanon. But when MQ experienced a second seizure several weeks later, family members took him to a hospital in Beirut.

MQ’s blood test results were normal. Computed tomography (CT) imaging of his head, however, demonstrated a single 5 x 7 x 2 cm space-occupying lesion within the right frontal lobe of his brain, extending into the corpus callosum. The mass lesion had hemorrhagic components (blood) and surrounding edema (swelling). To further investigate and treat MQ’s mass lesion, physicians recommended that he be admitted to the hospital for urgent steroid treatment; CT imaging of his chest, abdomen, and pelvis; and magnetic resonance imaging (MRI) of his brain. The UNHCR, through its partners, paid the hospital for MQ’s CT imaging but could not cover the costs of his brain MRI. Realizing he urgently needed the MRI, MQ paid with some of his own and borrowed money.

MQ’s images suggested his disease was limited to his brain. MQ’s care team recommended biopsy and excision of the mass lesion with adjuvant chemotherapy. The surgery alone cost the equivalent of about 6500 US dollars. Aware of MQ’s (and most patients’) inability to pay or even borrow such an amount, his care team helped him request funds from the Exceptional Care Committee (ECC) of the UNHCR in Lebanon.

The ECC is a group of physicians and others convened by the UNHCR to adjudicate payment amounts for medical cases that exceed a prespecified amount of money and that a refugee cannot pay. ECC reviewers agreed to pay 90% of the cost of MQ’s surgery, which occurred 2 months after his first seizure. In Lebanon, the UNHCR’s ECC does not pay for chemotherapy, as it is deemed too expensive. MQ saw no other option than to forego chemotherapy, given that he was already indebted to family and friends and barely able to finance his 10% of the surgery cost.

MQ’s tumor was partially resected during his surgery. He recovered and was discharged from the hospital. Nine months later, MQ had another generalized seizure, and his family members brought him back to the hospital, where tumor extension was noted on imaging. Dr T attends MQ, who was visibly distressed, crying while he explained what he has been through and despairing about his illness, symptoms, and poverty. Dr T evaluated him and expects that, without adjuvant chemotherapy, MQ will probably die within the year. Dr T and members of MQ’s care team wonder how to respond.

MQ’s situation as a refugee in a country of middle-income status (based on World Bank designation1) illustrates several dilemmas in the care of refugee patients with complex, chronic, costly, and life-threatening disorders. There were an estimated 26.4 million refugees and 4.1 million asylum seekers worldwide by the end of 2020, according to the UNHCR.2 Most refugees, asylum seekers, and internally displaced persons are in countries that are designated by the World Bank as low or middle income.3 The traditional framework of refugee health care has recently expanded from infectious diseases among camp-based refugees in low-income countries to include noncommunicable diseases in both low- and middle-income countries like Syria and Jordan, respectively, with the latter receiving a high proportion of older refugees, including people with multiple chronic disease risk factors.4,5,6

Prioritizing cure in smaller numbers of patients leaves other patients with rehabilitation or palliative needs with less, if any, financial support.

Cancer, as in the above case, can be costly to diagnose and manage and has a range of therapeutic options. Some treatments are inexpensive and easy to offer, but newer treatments tend to be expensive, less available, and less feasible to offer, despite having several advantages (eg, reduced drug toxicity, improved tolerability, life extension).7,8 Personalized approaches based on targeted drug therapies, for example, are often possible in high-income settings7 but extremely difficult to offer in refugee care settings due to higher costs and the need for a full range of sophisticated tests and experts. As in the case, in higher income care settings, tumor types (eg, genetic mutations) inform therapy decisions that can include a range of new or experimental interventions unavailable in lower income settings. Since intervention timing matters to patients’ outcomes, factors that inform care of refugees with cancer must be explicit and transparent. We suggest using a justice and equity lens to consider 3 fundamental questions about cases like this one: (1) Should refugee care costs be allocated as a specific amount per refugee or designated to fund only specific interventions? (2) Should interventions not available to host population members with low incomes be available to refugees? (3) Should refugee cancer care focus on cure, rehabilitation, and palliation or on just one or two of these areas?

Costs of caring for refugees and other forcibly displaced persons are largely determined by context. Whose treatment is paid for, in what amounts, and by whom differ by asylum location.9,10 Some governments and organizations working with refugees approach asylee care by specifying a maximum coverage amount per patient. Covering refugee cancer care costs up to a specified level (eg, dollar amount or health status) leaves some patients partially or fully treated and others untreated. If the goal is to treat as many people as possible at lowest possible cost, medications with serious side effects (eg, toxicity, secondary morbidity) might make financial sense but pose risk to individual patients. A second approach might be to partially or fully pay for therapies intended to cure patients’ cancer. However, prioritizing cure (eg, access to a full course of intervention) in smaller numbers of patients leaves other patients with rehabilitation or palliative needs with less, if any, financial support. Costs not covered by a host population or government must be covered by underresourced patients, families, or communities.11 A third approach, from a justice standpoint, prioritizes improving the health status of those in most need: rather than specifying a maximum amount per refugee or fully funding curative interventions, the goal is to offer minimum financial support for care of all patient asylees in need, where the definition of an acceptable minimum varies according to patient asylees’ needs and the capabilities of the host population or governing body. In what follows, we consider merits and drawbacks of implementing the third approach.

Balancing Care of Refugees and Members of Host Populations

Concerns about equity12 also require us to consider access to these same potentially lifesaving interventions in the host country population (ie, the nationals living in the country where the refugees are residing). Host country populations can be just as poor and underresourced as some refugee populations. In some circumstances, refugees may have more opportunities for funding through international agencies and donors, resulting in their better access to medical care than the poorer segments of the host population. This inequity creates moral dilemmas for clinicians and policymakers, since the number of patients who need advanced and state-of-the-art medical care—in both host and refugee populations—can exceed available resources and funds. Furthermore, a differential level of medical care favoring the refugees over the host country population might lead to resentment and anger in the latter. Since cancer care can be costly, treating people differently, based on their status or country of origin, can have significant implications for who can access health care.

Chronic care. Services for refugee health care are mostly reactive, as more money is spent on treatment than prevention or palliation.9,10,13 For instance, access to smoking cessation programs, nutrition and exercise programs, and screening, in addition to access to primary health care, are cornerstones of cancer prevention in well-functioning health systems. In MQ’s case, access to these services was not optimized. Similar arguments could be made for expanding refugees’ access to blood pressure management, diabetes screening, and mammograms to prevent disorders or to diagnose them early. Given the aging of refugee populations, especially in the Middle East, and the protracted nature of the conflicts in that region, disorders of older adults will continue to pressure health systems. Whether funding to focus on chronic disease and geriatric care is as readily available as funding for pediatric care and infectious disease, which are often prioritized, seems uncertain.

The roles of nongovernmental organizations (NGOs) are vital in chronic, noncommunicable disease prevention, as NGOs have flexibility, international networks, and expertise in humanitarian care. Delivery of health-focused messages, education on screening, and wellness approaches are necessary for refugees as well as host country populations.14 Moreover, cancer prevention and rehabilitation programs are needed in many locations. Patient and family support programs for refugees and host country members with cancer would also be valuable.

Palliative care. Palliative care—encompassing the management of pain and suffering—has traditionally not been part of the UNCHR and NGOs’ funding schemes for refugee health care, nor does it often exist in many of the low- and middle-income countries that host the majority of refugees. However, the traditional refugee health care agenda is dynamic and requires constant reevaluation over time. Palliative care can be effective and improve the quality of life for people with cancer near the end of life,15 in addition to being low cost and providing aspects of care that promote the dignity of persons with cancer. For instance, pain management, patient comfort, decision-making support, addressing compounded trauma, and establishing goals of care are all integral to this approach.16 Training for palliative care in refugee settings is, however, almost absent in lower income settings but could be integrated with other types of training in both host and refugee populations.

Cancer care for refugees will continue to be challenging, as the pace of science leads to many options for care for those with resources. Thus, refugees and host populations in low- and middle-income countries with limited resources have fewer specialized care options. Although we do not answer each of the questions we posed about coverage of care costs in refugee and host populations, we emphasize key resource allocation decisions. In so doing, we present the gravity of choices that refugees, their families, clinicians, host governments, NGOs, and international agencies face as they attempt to meet the needs of patients like MQ.

Winning artist is awarded a $5000 prize. 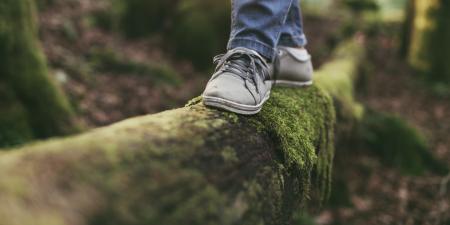 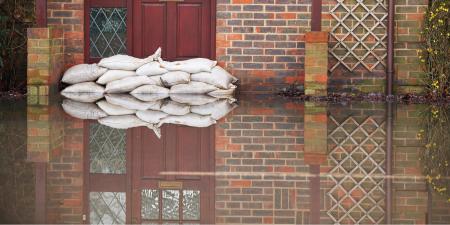 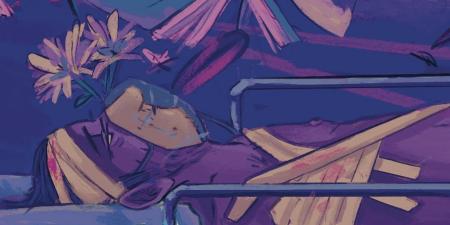 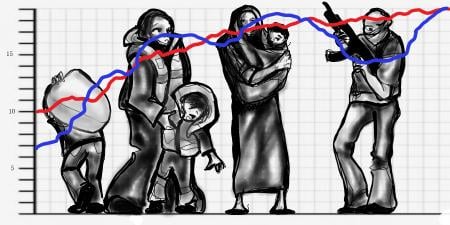