When you receive the report on a breast magnetic resonance imaging (MRI) performed on one of your patients, how should you proceed? Breast MRI is a new and exciting technique that holds the promise of further improvements in screening as well as in the detection and management of breast cancer. Responding to the information in the findings report will soon become a routine part of modern breast care, but for many clinicians it represents another ingredient in the already cluttered recipe of modern breast care.

Since the advent of low-dose mammography, radiologists and clinicians have recognized that even the best mammography misses 10-20 percent of breast cancers [1]. Yet it has been the most relied-upon instrument for early cancer detection for over three decades. In the late 1980s, MRI emerged as a method to evaluate the integrity of silicone breast implants. The subsequent use of contrast-enhanced MRI allowed this modality to detect breast cancers that were not visible with conventional mammography and ultrasound. In 2007 the American Cancer Society issued a set of guidelines that will dramatically expand the use of contrast-enhanced breast MRI for screening patients who are at high risk of developing breast cancer [2]. Hence clinicians will be in the position of determining which of their patients might benefit from screening MRI and will confront a host of new questions based on the results of those tests.

MRI detects breast cancer by making it possible to image regions within the breast that are enhanced after the administration of intravenous, gadolinium-based contrast [3]. The findings are classified on the basis of their morphology and enhanced characteristics. Classic patterns of suspicious morphology include irregular or spiculated lesions as well as ductal enhancement (often described as linear-nodular). The most suspicious pattern of enhancement is the rapid wash-in and subsequent wash-out of the contrast medium, a so-called type 3 curve, but many malignant lesions can also demonstrate a plateau with persistent enhancement after initial wash-in-a type 2 curve.

To undergo a breast MRI, the patient must be able to lie prone in the magnetic resonance (MR) unit for approximately 30 minutes, must remain still during the 6- to 8-minute dynamic phase of contrast enhancement, and must be able to receive the gadolinium-based contrast. In premenopausal women, the appearance of the breast is dependent on endogenous hormones, so, at our institution, we limit breast imaging to days 7 through 14 of the menstrual cycle to minimize hormonal effects. Nevertheless, there are some women in whom suspicious findings are hormonally related and are observed to regress on follow-up scans. This can also happen in postmenopausal women who are taking exogenous hormones. In these cases, the recommendation is to discontinue the exogenous hormones and repeat the breast MRI to determine if biopsy is needed.

Patients who undergo MRI fall into three broad categories: (1) those with known breast cancer for whom the study is being performed to aid in treatment planning or follow-up; (2) those who are symptomatic and in whom breast MRI is being used for problem-solving, and, (3), those who are at higher risk for breast cancer whose MRI is being performed to screen for occult tumors. I will not discuss the management of the first group, since these patients are typically managed by a team of breast cancer specialists.

The reporting of breast MRI uses the BIRADS (breast imaging reporting and data system) nomenclature like that used in mammography. This classification is designed to help clinicians recognize the key finding that the radiologist is trying to communicate. As with mammography, results from MRI are divided into 3 main categories using the BIRADS terminology.

BIRADS 1 or 2 ( Normal or benign findings). From a management point of view, the chief difference between use of MRI for screening purposes and for symptomatic patients is the action taken subsequent to a BIRADS 1 or 2 designation. For patients whose risk status justifies screening with MRI, a benign MRI report leads to the recommendation of annual imaging using both MRI and mammography. For symptomatic patients, a benign result typically leads solely to clinical and mammographic follow-up.

BIRADS 3 (Probably benign). As in mammography, certain types of lesions show up on breast MRI that are highly likely to be benign but require repeat imaging. Patients with this type of lesion(s) are classified as BIRADS 3 (probably benign). Follow-up MRI is needed to confirm that these lesions are stable and is typically performed for a period of three years, with the first follow-up study at 6 months.

BIRADS 4 or 5 (Suspicious for malignancy). Patients with this category of results have lesions that are more suspicious and require tissue sampling. These lesions are the most challenging for both radiologists and clinicians. Despite recommendations that breast MRI be performed only at centers with MR-guided breast biopsy capability, many centers without this capability offer diagnostic breast MRI. As a clinician, it is important to assess the capabilities of your local imaging facilities before sending patients for a breast MRI. Patients tend to receive better care when the selected facility can either perform a full spectrum of breast imaging and biopsy procedures or has an established relationship with such a facility.

So how do radiologists decide what to do with a BIRADS 4 or 5 suspicious lesion on an MRI? As described above, the patient's hormone status affects the appearance of the breast on MR images. This is particularly problematic for perimenopausal patients in whom it is harder to schedule the examination so that it avoids the luteal or secretory phase. Depending on the appearance of the lesion, some of these patients may be asked to return for a repeat study in 2-3 months, in the hope that hormonally mediated pseudolesions will regress.

If you need to refer your patient to a separate facility for a biopsy, you can expect that some institutions will ask some patients to have a repeat MRI study. Because a variety of techniques are used in breast MR, many radiologists will not proceed without obtaining results using their own protocol. Once it is agreed that a biopsy is desirable, the radiologist will want to review any prior mammograms to confirm that the MR-detected lesion is occult on mammography. Many centers will also perform a breast ultrasound prior to MR-guided breast biopsy, since some MR-detected lesions are visible on a detailed ultrasound examination that focuses on the region of the suspicious lesion [4]. Our center recommends a focused ultrasound for those MR-detected lesions that are mass-like and approach 10 millimeters in diameter. Lesions that are visible by ultrasound are then biopsied using ultrasound guidance. While ultrasound-guided biopsy is an easier procedure for the patient, careful follow-up is needed to ensure that the correct lesion was sampled. This is particularly true if there is any discordance between the pathology results and the appearance of the lesion on MR. Lastly, some lesions cannot be accessed for biopsy using MR. For these patients, contrast-enhanced CT can occasionally be used to biopsy MR-detected breast lesions [5].

As far as the patient's experience, an MR-guided breast biopsy is similar to other image-guided biopsies with a few exceptions. The patient should discontinue medications that increase bleeding, such as aspirin, warfarin, and clopidogrel. Patients who tolerate diagnostic breast MR generally have no problem with the positioning for the biopsy, although the latter procedure takes somewhat longer (45-60 minutes) than the former. Patients should be aware that a tiny metal marker will be placed at the biopsy site at the conclusion of the procedure. This marker makes it possible to perform an accurate surgical biopsy in patients whose MR-guided biopsy demonstrates cancer. The marker is nonferromagnetic and will not set off the airport metal detectors. Once MR-guided biopsy is completed, the radiologist will hold manual compression at the site for approximately 10 minutes to minimize hematoma formation. Hematoma and ecchymosis are slightly more common than with other image-guided breast procedures. Patients can be given icepacks and instructed to use both ice and acetaminophen to minimize discomfort overnight. 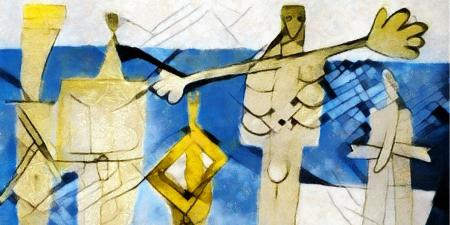 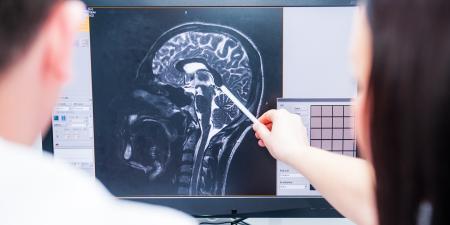 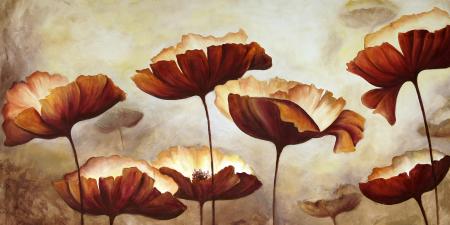