Structural racism within health care has become a recent priority for many academic health centers (AHCs) nationally. In this theme issue, we suggest that one important way to prioritize this topic is by assessing ways in which de facto racial segregation continues in health care today. Segregation has not received much attention, but practices of sorting patients into different tracks of care within a facility or system by insurance status,1 race,2 and other social demarcations exist, which is what we shall call segregated care in this theme issue. While sanctioned racial segregation in hospitals ended with the Civil Rights Act of 1964 and subsequent implementation of Medicare in 1966,3 health care organizations continue to practice de facto racial segregation today. Beyond individual institutions, segregated care exists at the city level through unequal resource distribution and health insurance inequity.4,5

As students in an AHC, we witnessed segregation of our patients daily. Patients with Medicaid are triaged to resident and fellow clinics—staffed by trainees—while privately insured patients largely receive care in another building and are seen by faculty, attending physicians who have completed their training and certifications. It is important to acknowledge that segregation based on insurance is a de facto proxy for segregation by race far too often. In New York State, 18% of nonelderly Medicaid recipients are White, whereas an estimated 62% of nonelderly patients with employer-provided coverage are White.6,7 One study found that resident physicians in an AHC saw disproportionately more Black and Latinx patients than did attending physicians, as well as disproportionately more patients on Medicaid.8 When physicians-in-training see disproportionate numbers of patients of color compared to fully trained and licensed physicians, undoubtedly there are differences in quality of care that patients receive. In our conversations with other students and health justice advocates, we came to learn that this practice is common at AHCs, both in New York City and throughout the United States.

Two recent studies have pointed to the potentially large impact of segregated care on health outcomes in communities of color. In a 2019 study of primary care settings, patients treated by residents were less likely than patients treated by attending physicians to reach chronic disease management and cancer screening benchmarks.8 Another study found that Black and Latinx patients who presented to one large urban AHC’s emergency room with heart failure exacerbations were less likely than White patients to be admitted to the cardiology service, which is known to have better health outcomes for patients admitted with heart failure than the general medicine service.9 Segregated health is reminiscent of a “separate but equal” doctrine that upheld de jure racial segregation through Jim Crow laws up to the mid-1900s.10,11

In our time navigating medical school and subsequently, residency, we came to see the ramifications of this practice on us as trainees. We began our studies with ideals based on our school’s mission to champion exceptional patient care for all patients; yet we came to see that patients with low incomes face significant impediments to their care in a 2-tiered system. We were indoctrinated into this system of care as the status quo and witnessed the ways in which our superiors acted within it: they taught us the practice of medicine without mentioning underlying patterns of racism in our segregated practice and, when acknowledging the existence of segregated care, they showed no agency by acting to change it. To say the least, we had neither a name for the phenomenon of segregated care nor a common language with which to discuss it in our health care communities.

As students, we engaged in advocacy in an attempt to start conversations about segregated care and to move the needle toward integration. Our conversations with clinical leadership were eye-opening—reactions ranged from denials of racial segregation (“It’s not race, it’s class!” said one clinical leader), to outright defenses of classism (“If you have more money, you stay at a nicer hotel!” said one department chair), to actively working toward integration. We struggled with how to get such leaders to take ownership of and accountability for their troubling views that illuminate need for change in deeply entrenched patterns of unjust support of a status quo. Several hospital administrators simultaneously denied the existence of segregated care and insisted that the problem was being fixed, then wished us luck with “our project” on the way out the door. In the face of such resistance, we turned to the academic literature for help in supporting our cause and situating modern segregated care within its historical, legal, and economic context, only to find published work on the topic sparse.

We aim in this issue to open an academic dialogue on segregated care, one that can be drawn on by health justice advocates to begin to dismantle segregated systems. This issue incorporates multidisciplinary perspectives and questions on segregated care and desegregation, including the history of segregation in health care; why legal arguments have failed to desegregate health care; how financial systems can be used to advance health equity; how health care for “very important persons” reifies segregation; the influences on students and trainees of learning within a segregated system; the roles that AHCs can play in desegregating their departments and organizations; and the responsibilities of AHCs to communities they serve.

In having this dialogue in an academic journal, we recognize that the most important participant in this conversation is missing: the actual communities whose health and well-being is affected by our segregated systems of care. Academic health care tends to value publication as the final endpoint of research and as the only valid type of knowledge; however, working toward desegregation requires more than what can be encompassed in a journal. It involves recognizing, supporting, and elevating community members’ voices and, at times, putting one’s own welfare, career, or reputation at risk in doing so.

There is no one answer to how to promote desegregation. Segregated systems are deeply entrenched in how we learn medicine and deliver care and in how profit incentives tend to exacerbate inequity. The act of dismantling racism in health care requires all health care staff to recognize their own complicity in a racist health system—despite the fact that they did not create it. We hope that the articles in this issue will start a conversation, spark inspiration for change, and lead to concrete action nationally to desegregate health care. Segregated care is a problem each of us in health care must own, and we all have a responsibility to create a more just system.

Peruse past winners of our art and essay contests. 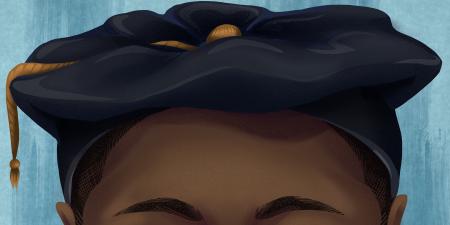 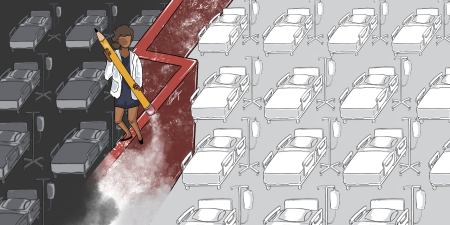 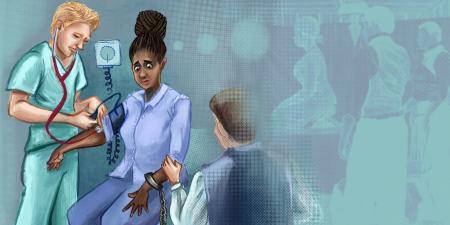 A Clinical Encounter in Historical Context