Dr. Joe Wilkins delivered Carol Mason's first daughter 3 years ago, and her second daughter is due in 6 weeks. Mrs. Mason's pregnancy has been uncomplicated so far. At her last regular check-up a month ago, Mrs. Mason, who is now 33, asked whether Dr. Wilkins would "tie her tubes" at the time of the delivery. Dr. Wilkins agreed to do so.

At this visit, Mrs. Mason brings up the topic again and requests that Dr. Wilkins not tell her husband, John, about the tubal ligation. "I know he would like to have more children, and really wants a son," she explained.

"You're my patient, and there is no reason for me to tell your husband," Dr. Wilkins replies, "but you should think about the consequences of not telling him. He'll expect you to become pregnant again and wonder why you're not."

"I know, but I don't want any more children. I'm establishing a career that's important to me. John and I have had this conversation a dozen times, and it goes nowhere. The bottom line is, it's my body and I don't want any more children. But I just wanted to warn you that as soon as John sees you in delivery, he's going to ask how it went and whether it looks as though everything's all right for me to have more babies."

Carol Mason seems to be placing Dr. Wilkins in an untenable position. She wants him to perform a tubal ligation, conceal this procedure from her husband, and yet be prepared to respond to her husband's anticipated question: Is everything all right for my wife to have more babies?

Dr. Wilkins' first option is to refuse to perform the procedure. Two possible reasons would clearly justify such a refusal: if Dr. Wilkins had a moral objection to permanent sterilization, he would have every right to inform Mrs. Mason of that fact and refer her to another physician. Second, if the woman requesting the procedure were unable to give a true informed consent, either because she did not understand the nature of sterilization or because she was being coerced into having it, then Dr. Wilkins would not only be justified in refusing her, but he would be obligated to do so. There may be other situations in which a refusal would be legitimate, for example, a request for sterilization from a 19-year-old woman who has not had any children, but such cases are more debatable and require individual analysis.

At any rate, none of these possible justifications applies in the case of Mrs. Mason. Dr. Wilkins has already agreed to perform the procedure, and Mrs. Mason is simply making an additional request of him. How should he respond to her request?

It is clear that Dr. Wilkins' patient in this case is Carol Mason, and that he owes her confidentiality with respect to her medical treatment. All medical codes of ethics stress the importance of confidentiality, and the HIPAA regulations that took effect on April 14 (2003) protect patient information under federal law. There is no spousal exception to the duty of confidentiality.

However, Dr. Wilkins needs to help Mrs. Mason consider the consequences of pursuing her plan to conceal her tubal ligation. She, as well as Dr. Wilkins, would likely be faced with years of questioning from her husband as to why she isn't getting pregnant and whether they should pursue medical services to help her conceive. Is she willing to undergo infertility testing and perhaps even pursue infertility services? To what extent is she willing to engage in an extended charade in order to conceal her medically induced sterilization?

Dr. Wilkins could support Mrs. Mason's wish not to become pregnant by suggesting effective alternatives to sterilization. Her husband might be agreeable to using of contraceptives, even a long-term contraceptive, since this would not permanently foreclose the possibility of another child. Dr. Wilkins could reflect on experiences with other pregnant women who had decided this was to be the last child but who changed their minds later. He could also encourage Mrs. Mason and her husband to seek out a counselor to help them work through their disagreement. Since their numerous one-to-one conversations on the topic "went nowhere," perhaps they need the assistance of a skilled counselor.

If it were clear that Dr. Wilkins was faced with the choice of either breaking confidentiality or outright lying (for example, if Mrs. Mason insisted that he record a false code on the insurance claim because her husband might see it), Dr. Wilkins would be justified in refusing to perform the procedure under those conditions. Otherwise, he should go ahead with the sterilization he previously agreed to perform but should carefully prepare his responses to Mr. Mason's anticipated questions. In addition, he should inform Mrs. Mason what those responses would be.

It is possible for Dr. Wilkins to respond in a way that protects patient confidentiality but is not deceptive. A possible scenario:

Mr. Mason: Did everything go OK?
Dr. Wilkins: Yes, fine. Mom and baby are doing great.
Mr. Mason: Is everything all right for Carol to have more babies?
Dr. Wilkins: She's in excellent health. But with the new federal laws on privacy, I need to be sure I have Carol's consent before I discuss specific medical information with anyone. As her husband, you're certainly in a special position here. I'd suggest that you discuss with her whether the two of you might want to make an appointment to come to my office together in the next few weeks. 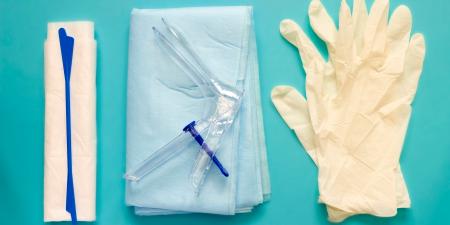