The United Nation’s Sustainable Development Goals (SDGs) mark an important moment for the world to improve human capital through nutrition and health goal setting. While the Millennium Development Goals contributed to the reduction in the number of undernourished people, the agenda remains unfinished. We are at a crucial crossroads with malnutrition burdens and hunger not decreasing as fast as they should and sometimes increasing. There is a moral imperative to act on the SDGs for nutrition, and health systems and professionals working in those systems have significant roles to play in fulfilling the objectives set out by the goals—that is, in ensuring that all citizens have a chance to achieve their own development.

Setting global goals serves as a policy tool for promoting cooperation within the international community. Their main purpose is to draw attention to neglected priorities that the world should care about and to make achieving those goals a reality. Global goals are not treaties with binding obligations. They are not intended to be “implemented” by a world authority as planning targets might be. Instead, they set out priority agendas and frameworks for evaluating overall progress and for guiding efforts.1

Global goals do matter. They provide an incentive for countries to be bold and ambitious in their commitments to their citizens. They establish a common framework that global leaders agree is important. They bring partners to work on “wicked” challenges and provide a platform where donors can invest in things they care about. They can be essential for mobilizing stakeholder networks and funding, creating peer pressure, and spurring epistemic communities—networks of expertise, knowledge, and practice—into action on agreed-upon challenges.2

The Sustainable Development Goals (SDGs) are such a policy tool. As I have written elsewhere, “With the approval of the … SDGs at the UN General Assembly in New York in September of 2015, we said goodbye to the Millennium Development Goals (MDGs), assessed our past achievements, and worked towards a broader, bolder set of targets that will steer our world onto a new path of sustainable development.”3 The SDGs and the MDGs are global agendas with set goals, targets, and indicators to measure progress pertaining to core areas of development among nations. Three major goals of the SDGs directly relate to nutrition: SDG1, SDG2 and SDG3 (see figure 1). SDG1 is the overall poverty goal; SDG2 is the hunger and nutrition goal; and SDG3 is the health goal.4,5 Many of the other 14 goals indirectly relate to nutrition and diet by targeting areas such as climate change and natural resources, education, and women’s empowerment, for example. The inclusion of nutrition in the SDG agenda is of critical importance to continue the progress made during the MDG era (2000-2015). While much was achieved, the MDGs fell short of accomplishing their objective of eradicating undernutrition. The final year of the MDGs indicated that the proportion of undernourished people in developing regions had fallen by almost half from 1990-1992 to 2015-2016—from 23% to a projected 13%—and that the proportion of children under 5 who are underweight declined during the same period, although at u+nequal rates and not everywhere.6

Evaluating the MDGs and SDGs

Lessons were learned from the MDG era and the goal-setting process itself. First, some might argue that the MDG agenda was too narrow in scope to capture the full range of important global priorities for development and that the focus was more on eliminating poverty for those countries struggling with low resources, not on sustainable development goals for all countries. For this reason, the MDGs set the bar quite low for middle-income and high-income countries where the poverty goals had already been met. Second, in formulating the MDGs, the process was not inclusive; some felt the formulation of the MDGs was faulty because of inadequate consultation by governments, social movements, and other development players. Third, there were also controversies about the formulation of the targets themselves.7 The one-size-fits-all targets that were agreed upon at the global level did not always make sense at the country level, as priorities are context dependent. Fourth, the methodology for defining targets was arbitrary and inconsistent, often leaving reporting channels and mechanisms less clear.8 Finally, many experts felt that the MDGs failed to incorporate important human rights principles and standards such as equality and nondiscrimination, participation, and accountability.9,10

By contrast, the process of developing the SDGs was much more inclusive, involving many stakeholders across the world. For this reason, the SDGs encompass major global challenges such as climate change, conflict, and governance.11 In addition, every country must work to achieve the goals. Not one country is immune to the process. The MDGs focused mainly on developing countries to create a razor-sharp focus on poverty reduction. The SDGs, by contrast, are designed to be transformative and aspirational, with a focus on human rights and leaving no one behind.12

However, the widened scope of the SDGs has been criticized. First, the term “sustainable” is not fully agreed upon, which leaves the paths towards sustainable development open to interpretation. Second, many experts believe the SDG agenda has too many goals and targets but still leaves things off the agenda.13 The thinking is that if you have too much on an agenda, you are left with everything being a top priority, which can mean nothing is a priority.14 Third, some goals do not have measurable, set targets or have missing indicators, making them difficult to track over time and weakening the call for accountability. Some have argued that the current set of targets is unactionable, unquantifiable, and unattainable.14 Finally, achieving some SDGs will have negative impacts on other SDGs.15,16 For example, economic growth does not always lead to improvements in nutrition and can sometimes have negative impacts, such as a rise in obesity. The possibility of negative impacts makes it much easier for countries to “opt out,” leaving the goals voluntary at best. However, the original intent was that the goals could be modified upon demand for “different national realities, capacities and levels of development and [would] respect policy space and priorities.”11

We still are dealing with very high burdens of food insecurity and undernutrition; 23% of the world’s children under the age of 5 are affected by stunting.17 In addition, 815 million people go to bed hungry.18 Overweight and obesity, however, are major risk factors of noncommunicable diseases (NCDs), and obesity trends are not moving in the right direction. Currently, a staggering 2.1 billion people suffer from overweight and obesity globally and, of these, an estimated 41 million children under 5 years of age are overweight.17,20 These growing rates of overweight and obesity worldwide are linked to a rise in NCDs—life-threatening conditions that are overburdening health systems and medical professionals.

NCDs are currently the most common cause of death and disability worldwide, accounting for 68% of global mortality, or 2 out of every 3 deaths.19,21 Of the 38 million deaths due to NCDs in 2012, 16 million or 42% were premature (ie, before the age of 70) and largely avoidable—up from 14.6 million in 2000.19 Almost 75% of NCD deaths occur in developing countries.19 Higher death tolls are also associated with poorly functioning health systems in many low-income and middle-income countries.

The multiple burdens of malnutrition are wreaking havoc on health systems and our capacity to move towards more sustainable development. One could argue that having a set of common goals to address these burdens is not only essential but also a moral obligation.22

What the MDG commitments did do was provide the momentum for countries to track progress toward globally agreed-upon poverty reduction targets, which included reducing hunger and undernutrition.10 Moreover, because at that time communicable diseases were tearing apart many of these countries,23 the MDG agenda also allowed for significant investments in communicable diseases such as HIV/AIDS and tuberculosis, which helped bolster health systems in many low-income countries.6 What the MDGs did not pledge to do was track more meaningful indicators of undernutrition—stunting and wasting—which are more actionable indicators for tracking both chronic and acute malnutrition. By contrast, the SDGs include both stunting and wasting as primary indicators to be monitored over the next 15 years (see figure 1).3

During the era of the MDGs, slowly and insidiously, NCDs—mainly cancer, cardiovascular disease, chronic respiratory diseases, and diabetes, along with overweight and obesity—were increasing among populations almost everywhere. Virtually no country remained untouched.24 The burden of overweight and obesity and NCDs was completely ignored in the MDG agenda. But now this has changed. Childhood overweight is an indicator in SDG2 and an NCD reduction target is embedded in SDG3.11 Thus improved health systems could be seen as an opportunity for easier entry points in treating complex, chronic diseases such as NCDs.3

Recognition of NCDs as part of the SDG agenda aligns well with other goal-setting agendas, including the World Health Organization (WHO) Comprehensive Implementation Plan on Maternal, Infant and Young Child Nutrition,25 as well as the 6 global nutrition targets 2025 and the 9 global targets on NCDs established by the 2013 World Health Assembly.26 Furthermore, in November of 2014, governments committed to ending hunger and malnutrition in all its forms at the Second International Conference on Nutrition.23 However, key indicators to measure the multiple burdens of malnutrition, their risk factors, and outcomes were left off the SDG agenda. Astonishingly, there is still no target or indicator to track overweight and obesity in adults. In addition, there are no indicators or targets for exclusive breastfeeding and diets, both important contributors to nutrition outcomes.3 Nevertheless, the SDGs are critically important to countries, probably more so than the other aforementioned commitments and targets, as the negotiations for the SDGs were set out by countries themselves and, over the first 3 years, most countries have established plans to achieve at least some, if not all, relevant SDGs.

If countries want to make a dent in the multiple burdens of malnutrition and attempt to achieve the SDGs related to nutrition, drastic changes will need to occur. These changes will involve cost-effective strategies that include reducing modifiable risk factors (related to tobacco smoke, alcohol, diet, and physical activity), coordinating mandates between health and agriculture sectors, strengthening and connecting health and food systems, improving nutrition surveillance, and expanding coverage of essential medicines, technologies, and treatments.27

In 2015, former Secretary of State Madeleine Albright wrote: “In a world where one-third of all edible food never makes it to the mouths of the hungry, we all have an individual moral responsibility to do our part.”28 The SDGs are an important step towards taking that responsibility. To achieve them requires new ways of making goals matter.12 First, there needs to be an accountability mechanism that holds governments’ feet to the fire. In particular, the wealthiest countries should help those countries with less resources.29 Currently, overseas development assistance for nutrition and NCDs is less than 1% to 2% of development assistance for health.30,31 Second, when countries do commit to the goals and put metrics in place, these should be scrutinized to determine if the goals are realistic and if impacts can be measured. Third, as Thomas Pogge indicated, goal-setting agendas can be perceived as political spectacles but do nothing to address root causes of why there is hunger and inequity.7 To fully address root causes, SDG priorities should be seen as universal and mutually reinforcing. 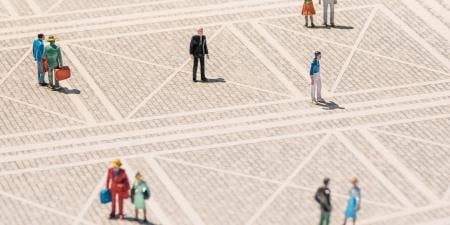 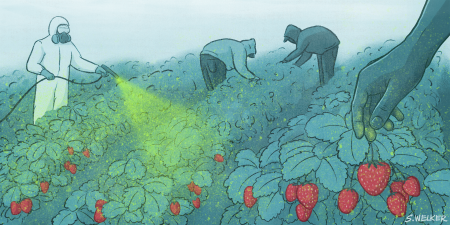 How Should Physicians Help Patients Who Are Ill Because They Work in Agriculture? 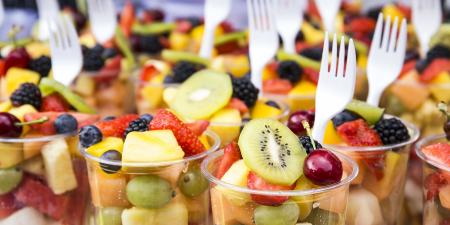 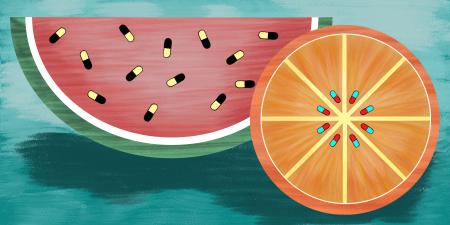