Despite the prodigious medical literature on cancer care, some patients rely on celebrity narratives as frameworks for understanding their experiences of cancer and as benchmarks for decision making. Regardless of whether these narratives are appropriate sources of health information for patients, it has been shown that celebrity narratives influence patterns of care. Three cases—John McCain, Angelina Jolie, and Jimmy Carter—are presented to illustrate how media coverage of cancer can have unforeseen consequences on individual patients exposed to these kinds of stories. For this reason, clinicians should become familiar with these narratives and comfortable with discussing how celebrity narratives can shape patients’ views and decisions.

The internet has drastically changed the landscape of medicine in general and cancer care in particular.1 While the medical profession continues to communicate scientific advances in a top-down manner through medical journals, celebrity narrative has come to matter more as a source of information for the public, as people use the internet for bottom-up “organic advocacy.”2 In the past decade, several high-profile figures have publicly dealt with their cancer diagnoses and in turn shaped the evolving narrative of cancer in the media. Celebrity cancer stories range from exceptional, nongeneralizable narratives to stories of cancer management that align closely with scientific recommendations. For example, in the case of Senator John McCain’s diagnosis of glioblastoma, an incurable cancer, media coverage focusing on triumph obfuscated factual information regarding prognosis, which could inhibit other patients from addressing their goals of care. In the case of Angelina Jolie, who attempted to address breast and ovarian cancer prevention in women with BRCA mutations, the nuances of individual risk were misinterpreted by the public and impacted patterns of care. Finally, the case of former President Jimmy Carter shows that success with novel therapies can also create expectations for excellent outcomes, although researchers are still actively studying the side effects and benefits of these new agents. Regardless of whether celebrities’ experiences are generalizable, physicians cannot ignore the power celebrities have either to perpetuate or to neutralize false impressions of cancer management.

Before his death in August 2018, John McCain, the former Republican senator from Arizona, publicly revealed his diagnosis of glioblastoma (a form of brain cancer) and returned to Congress for critical votes regarding US health care and taxes.3,4 Glioblastoma, unfortunately, is a terminal disease, with the best treatment option consisting of maximal surgical removal of the tumor followed by chemoradiation, with only about a quarter of patients surviving 2 years after diagnosis.5 McCain’s story demonstrated that celebrity can reinforce entrenched, simplified views of cancer as manageable with aggressive, cutting-edge treatment. Media coverage of McCain—a war veteran and then-US senator in the midst of political crisis—focused on his innate character, resilience, and stoicism in his fight against cancer.6,7 The media, quoting prominent US politicians, leveraged McCain’s courage in war to reassure the public that he could overcome an unpredictable and a devastating illness.8 While messages of positivity and strength are certainly important in helping patients cope, patients facing similar diagnoses might have interpreted such coverage as a promise of their own chances of recovery, although the majority of patients experience fear, weakness, and the very real comorbid psychiatric symptoms and illnesses that can accompany cancer. Unfortunately, in an effort to show support for the senator, these narratives might perpetuate false hope for many patients suffering from glioblastoma, preventing patients and their families from pursuing appropriate care and psychological support.

In another case, Angelina Jolie attempted to alter the depiction of cancer in the media when she wrote about her own concerns about breast cancer risk, given that she had a mutation of the BRCA1 gene.9 She tried to empower women at risk of breast cancer by discussing her decision to undergo the preventative measure of removing both her breasts and by encouraging awareness of familial risk for breast cancer and exploration of therapeutic options in order to make informed choices.9 In a follow-up piece about the preventative removal of her ovaries and fallopian tubes, Jolie tempered the generalizability of her story, stating, “There is more than one way to deal with any health issue…. [C]hoose what is right for you personally.”10 Multiple studies have found that the mere publication of Jolie’s narrative impacted patterns of care on a broad level, with patients seeking information regarding risk-reducing double mastectomy and asking for genetic testing.11–13 As is commonly observed by oncologists, patients frequently misinterpret double mastectomy as a recommended safe and precautionary treatment for all women worried about breast cancer, regardless of pre-existing risk, without realizing Jolie’s decision reflected the fact that she had an 87% lifetime risk of breast cancer from a genetic mutation.9 This misunderstanding of medical facts in many cases leads women to pursue unnecessarily aggressive surgical options when they might otherwise pursue less invasive and less morbid preventative and treatment options.

While Angelina Jolie focused attention on cancer prevention, former President Carter used his celebrity to call attention to novel therapies, such as immunotherapy, for patients with advanced cancers. He described the multidisciplinary care he received—including surgery, immunotherapy, and radiation—as well as the multi-institutional care he received, all of which are in no way restricted to former presidents or Nobel Prize winners.14,15 His uneditorialized description of the logistics of his care were perhaps the most generalizable. However, access to novel therapeutic agents is not easily obtained, and while former President Carter had a wonderful response to his treatment, there is still a great deal that is unknown about the benefits and risks of new agents such as immunotherapy.16 These kinds of success stories are important and of scientific merit, but the treatments they describe are not guaranteed miracle cures on which every patient can pin hopes.

These cancer stories matter because they influence care. Several studies have shown that information seeking, cancer screening, and primary prevention are influenced by celebrity narratives of cancer care.11,13,17-20However, these studies did not measure the fear and psychological distress that also might accompany excessive screening or drastic unnecessary medical procedures. Furthermore, we know that patients with advanced cancer who do not understand their prognosis are more likely to choose aggressive treatments instead of considering treatments that might better subserve their quality of life.21,22 Therefore, we can infer that celebrity stories that further perpetuate false understandings of prognosis might lead cancer patients to seek care that might not align with their true wishes had they possessed a realistic understanding of their disease. Mostly, these studies underscore a terrifying reality: patients find scientific evidence generated by rigorous clinical trials less compelling than anecdotes by or about celebrities.

Ultimately, famous people have no legal or ethical obligations to other cancer patients. They are not physicians, and the general public is not their collective patient. They have a right to express their experience of care and how it impacts their lives in the way they choose. Technically, they owe nothing more than any other cancer patient owes in the public domain. To this point, even ordinary people can leverage social media to impact public understanding of cancer.23 However, celebrities do not have the scientific expertise to give medical advice and to highlight nuances in different cases. This unfortunately means that, when they do tell their stories, falsehoods and myths can become entrenched in the public understanding of cancer care.

However, to ignore the impact celebrity words have on other patients would be akin to denying that tobacco advertisements have no impact on smoking and, therefore, cancer risk. Celebrity narratives can have powerful effects both in favor of evidence-based medicine and against it.24 Celebrities communicate how cancer impacts their work, the role of faith as a source of support, and their fear of the possibility of cancer returning. These ambassadors of cancer care share how they struggle to lift life, work, and family out of the sea of medical jargon, appointments, and side effects that become routine. They destigmatize the diagnosis, promote self-empowerment, and help people find support in common experiences.

Celebrity power in the media makes public figures both ideal and necessary partners.24 Experts in cancer care, whose research is scientifically sound and grounded in data, need to cultivate voices that are strong and emotionally resonant and whose message is accessible to the public as well as evidenced based.

Physicians should be aware of the stories to which patients gravitate before they ever enter the office and should consider reading media in conjunction with medical journals. Relying on the media for health information can be considered a structural risk factor in the same way that a neighborhood with high air pollution and poor access to healthy food and low vaccination rates are structural risk factors. Physicians take into account information about the health environment of the individual—which should include social media—in order to improve communication, narrow differential diagnoses, and make realistic health plans. There could be barriers, biases, limitations, and health literacy discrepancies that form in the online space. It is helpful to know what patients read and to address the impact of this content on how patients view their health.

Ultimately, the best space to engage with patients is still the office. Physicians are limited in their freedom of speech in the office by privacy laws (eg, the Health Insurance Portability and Accountability Act [HIPAA] of 1996) and possibly by liability policies. However, as physicians recognize misconceptions perpetuated online regarding cancer care—such as the belief that extensive surgery is required for low-risk, early stage breast cancer—there might be opportunities in physician-mediated forums to encourage people to discuss their personal medical decisions with their own physicians who understand their clinical case.

The impact of celebrities on cancer care exists, regardless of whether physicians believe it should. In fact, the impact of celebrities on patients’ newfound engagement with media extends far beyond cancer and has been shown to impact screening for infectious diseases as well.25 In response, medicine must find its way to the information mainstream if patients are to receive the most helpful and accurate information. Physicians can partner with celebrities to ensure accurate information is available online by linking anecdotes with standard guidelines. Furthermore, physicians should understand that relying on media for health information is a structural risk factor and warn patients about the potential effects of the media on their perceptions of cancer and decisions regarding their own health care and bodies.

From Silence into Language: Questioning the Power of Physician Illness Narratives 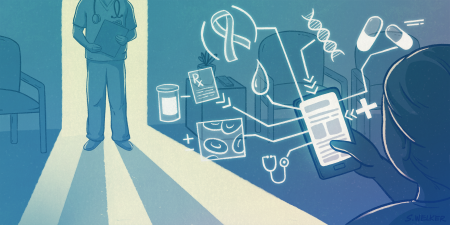 The Internet, Ethics, and False Beliefs in Health Care 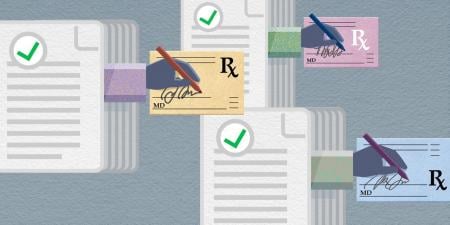 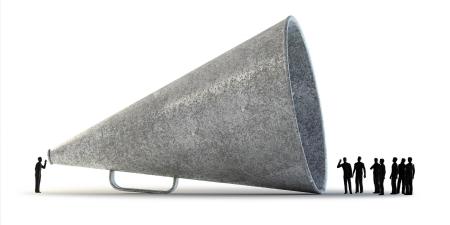 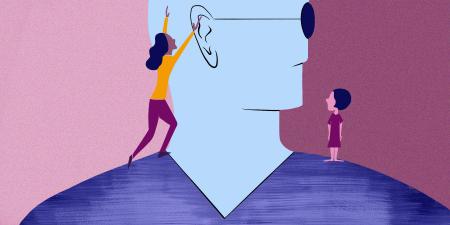 How Should Clinicians Address a Parent’s False Belief Generated by Denial or Grief About How to Care Well for a Child?