Motherhood is a drama in many acts that ends only with the death of the cast. Second and third acts never get as much attention as the thrilling opening scenes featuring pregnancy, childbirth, and babies. When a woman becomes a mother she is changed forever, physically and psychologically. An intimate lifelong relationship begins with a new human being who is fully her responsibility. Motherhood is constituted of an irreversible, committed relationship between a mother and another unique human being who is dependent on her. A mother possesses responsibility for a mutual relationship that is dedicated to the survival, thriving, and social flourishing of her beloved charge. It takes energy to give unconditional love and think intelligently about another’s best interest (what is most needed for her or him, and how can I make it happen? How can he or she fulfill his or her potential?). And mothers in the twenty-first century do not have a ready-made script to follow. What women have ever lived so long, or experienced so many sweeping changes in women’s roles?

The Dilemmas of Mothering

My family story is in some sense a traditional one: I have had a big family, lost an infant, lost a daughter-in-law in childbirth, and stepped in to mother her child in a three-generation household. I married young 59 years ago, stayed home for 14 years while having 6 sons and a daughter, and now have a family of 6 grown children and 5 grandchildren, including my 17-year-old live-in granddaughter Perry, who came home with my son when her mother died from complications of a C-section.

I have lived on the cusp of the feminist revolution and, unlike most of my feminine forbearers, I have been privileged to enjoy traditional feminine satisfactions as well as wonderful new opportunities for intellectual fulfillment. I have been able to write books, articles, and columns, and gradually obtain a PhD in psychology (on the 25-year plan). And being in good health with the gift of modern medicine, I have had time and energy to pursue a full academic career. I have participated in the exciting work of my husband, Daniel, as he co-founded the Hastings Center, a pioneering bioethical research institute.

Many different ways of combining nurturing and other kinds of work are possible. Negotiating the much-discussed and -debated work-family balance may be easy or difficult, depending on personal aspirations and social resources. A deep-rooted commitment to motherhood and a dedication to intellectual work make up the core of my identity. Consequently, juggling the needs of family and the demands of professional projects has always been an immense challenge. I feel like the storied Dutch boy who ran along the crumbling dike, plugging each new opening hole to save his land from flooding. What is the most important need to fulfill first?

The Experience of Mothering

As mothers move through the life cycle, different forms of maternal care emerge. The foundation for later maternal behaviors is an infant’s experience of being mothered. Later in childhood a small girl can prepare for future mothering by playing and caring for dolls, animals, siblings, and other of her kith and kin. In adolescence apprenticeships may begin with babysitting experiences; here fantasies about imaginary future children can arise. The actual drama commences after pregnancy and childbirth, when evolution-selected behaviors ground the culture’s learned prescriptions for mothers. The craft of maternal caretaking is both innate and socially learned.

Less noted is the fact that, as daughters grow up, forms of mutual mothering can emerge. Mothers and daughters can give each other maternal care when the need arises. My middle-aged Alabama aunt once held and rocked my elderly grandmother for 2 whole days after her youngest son had been killed in an accident. Mama Jones was a stalwart Baptist country woman, a hardworking mother of nine, but she needed her daughter’s comfort in grieving. Alternate, intermittent, and mutual mothering can continue until dementia or illness mandates a virtual reversal of the mother and child roles.

About 15 years ago a call for this reverse mothering sounded for me. This summons was to play a traditionally feminine role: to care for an old, ill parent. Unfortunately but unmistakably, my beloved stepmother, who had generously given me so much care since I was 7 years old, began to develop Alzheimer disease. At this point, “Mommy” or “Lady” had been widowed twice and had been established for 20 years in an upscale military retirement community in the D.C. suburbs. A fiercely independent, private and competent southern woman, Lady had been living a happy, socially active, and efficiently arranged life from her apartment.

When Mommy first began to falter in her busy routine, she seemed relieved to give up her apartment and let me help her settle in the assisted-living wing of the complex. And then, despite my wishfully thinking that she wasn’t all that badly impaired, it eventually became clear that she was, and she was moved to the building for the memory-impaired.

Reverse Mothering in the Twenty-First Century

During the next dozen years, as Mommy’s friends and distant relatives dropped away and her dementia progressed, she needed me. I supervised her care, attended to the paperwork, bought her clothes, hired supplementary caretakers, sent her flowers, and most importantly visited her overnight from New York.

I hardly ever engaged in the hands-on physical caretaking of feeding, dressing, diapering, and lifting into her wheelchair that so exhausts caretakers who can’t afford help or residential care. Institutional care becomes more of a necessity in light of a demographic fact: women now live so long that their aging daughters don’t have the physical strength to care for them. “I’m old too you know,” I used to joke with the young, strong female staff. In fact, as I neared 80, I was older than many of the residents and fit right in when I participated in the daily activities. And, over the years, the long subway and train rides to get down to D.C. became more grueling.

My main moral challenge during this end-of-life maternal caregiving was the one I have always faced: my deep desire to generously give time to my family and simultaneous need to throw myself into intellectual work. Since time and energy are limited, I have to make choices, and, as aging brings depletion of energy, more leisure and self-care become necessary and dilemmas and decisions become more sharply defined. Family-family conflicts come up as well. When my granddaughter Perry was a baby I was sometimes torn between caring for her and getting myself down to D.C. to visit Mommy. Which need was more urgent and which could I alone meet? The maternal mindset adopts a systemic contextual perspective and moves back and forth in time. Inevitably one makes mistakes and fails, but this must not be allowed to deter the effort. While life lasts and the brain still functions, maternal hearts and minds persevere. And so I continued to be Mommy’s chief visitor until she died quietly 2 days before her hundredth birthday.

The Lessons of Mothering

After my experience of mothering I can posit two important moral ideas. The first is that by virtue of being born of woman people have obligations to other human beings that are not explicitly contracted for, chosen, or necessarily foreseen. Unexpected events happen and bring moral imperatives. If my child becomes ill or my mother falls and breaks her hip, I must give help. Bad things happen to good, and bad, people, and as a member of the human community I must accept the moral obligation to respond. This is an even stronger mandate when my kin are in need.

The other more benign moral truth that I can confirm from experience is that, the more you give in love and work, the more you receive. Giving is receiving, helping brings happiness. Even in its worst moments, motherhood is full of meaning and purpose at whatever the age. More to the point—there can be few more joyful engagements with life. 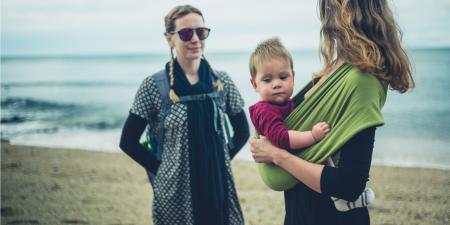 Induced Lactation for the Nongestating Mother in a Lesbian Couple