The documentation of immigration status in patient records poses a challenge to clinicians. On one hand, recording this social determinant of health can facilitate continuity of care and improved communication among clinicians. On the other, it might expose patients or their family members to immediate and unforeseen risks, such as being stigmatized and discriminated against by nonimmigrant-friendly clinicians or being exposed to immigration enforcement if staff contact immigration officials in violation of patient confidentiality. Patients may raise concerns about the purpose and risks of such documentation alongside fears about potential data sharing and violations of privacy and confidentiality. This commentary explores clinicians’ options for documenting immigration status within the context of ethical, legal, and historical considerations in caring for stigmatized populations in changing political landscapes.

Dr Lopez’s next visit is a well-child check with Anna, an 8-year-old Korean American who is new to his county-affiliated clinic. Her intake form indicates a history of asthma with one prior hospitalization and no current medications. He makes a mental note to explore this issue and walks into the patient room to see Anna playing with her mother, Ms P.

After introducing himself, Dr Lopez asks Ms P about her concerns. “Anna used to love school, but her grades have been slipping lately. Sometimes she asks to stay home or asks me not to go to work because her stomach hurts. I don’t know what’s going on.” After validating Ms P’s concerns, Dr Lopez asks if there have been any major changes or stressors in Anna’s life. She sighs, “I don’t get paid much at the nail salon, and it’s just the two of us at home. But that’s not new.”

She continues hesitantly, avoiding eye contact, “Actually, Anna once said she’s afraid I’m going to be taken away. I think she’s heard scary things in the news about what could happen to someone without papers.”

Dr Lopez realizes Anna is likely experiencing anxiety about her mother’s tenuous immigration status and possible deportation. He wonders how or even whether to document her mother’s immigration status in Anna’s health records. Documenting Ms P’s immigration status could help facilitate referrals, such as medical-legal referrals, and alert other clinicians to this significant life stressor. However, it could also impair the patient-physician relationship if he documents this detail without knowing potential risks or discussing them with Ms P. In a time of rapidly changing immigration policies, fear, and uncertainty, could he be exposing her family to discrimination or deportation risk?

Immigration status is increasingly recognized as a social determinant of health.5,6 Being undocumented is associated with multiple social and mental health conditions known to negatively impact health outcomes such as poverty, limited access to health insurance, limited employment opportunities, anxiety, and post-traumatic stress disorder.7 Children of undocumented parents are similarly affected, regardless of personal immigration status.8 Living in chronic fear of separation from family members and the aforementioned risk factors contribute to childhood toxic stress that can damage physical and mental health into adulthood.9,10

Historically, increased immigration enforcement has had damaging effects on mental health, led to fatal delays in seeking treatment, and reduced already low rates of Medicaid participation for citizen children in mixed-status families, impairing continuity of care and the ability to manage chronic health conditions.9,11 Since the 2016 presidential election, fear of deportation as a result of accessing health care appears to be leading to decreased use of some care among undocumented immigrants.12 Here, we explore whether it is appropriate for a clinician to document patients’ immigration status in their health records in the context of relevant ethical, legal, and historical considerations, concluding with consideration of the question within an immigration policy context marked by fear and uncertainty.

Clinicians’ primary professional and ethical responsibility is to provide quality care to all people regardless of immigration status or background. Identifying stressors and modifiable social determinants of health might help facilitate comprehensive care for patients. In fact, the American Academy of Pediatrics’ Immigrant Child Health Toolkit recommends asking families if any family members have left suddenly or are at risk for leaving suddenly and then helping to create separation contingency plans if needed.13 Importantly, because this screening question does not ask about immigration status directly, it serves to minimize emotional distress but still elicit information needed to offer support.

The ethical principle of beneficence compels clinicians to use known immigration status to benefit the patient. For example, legal and social work referrals could address immigration, employment, and housing concerns. Depending on county of residence, undocumented patients might be eligible for local health care coverage options and financial assistance, and clinicians can help facilitate access to these resources.14 However, explicit documentation of immigration status might not be required for referrals; verbal discussion and hand-offs between colleagues or indirect phrasing in a health record (eg, “ineligible for insurance” or “immigration stressors”) could suffice.

Moreover, clinicians’ commitment to primum non nocere—“first, do no harm”—can be challenged even if immigration status is recorded with beneficence as the goal. For example, health records can also be seen by clinicians with anti-immigrant beliefs, leaving patients vulnerable to discrimination or disrespectful treatment. There is also increased risk for detention and subsequent deportation if transfer includes traversing an immigration checkpoint.15 Furthermore, information could be difficult to remove from health records, potentially exposing patients to harm even if their immigration status changes.

Reporting undocumented immigrants to officials certainly falls outside the ethical boundary of nonmaleficence and has been denounced by the American Medical Association (AMA).16 Although much less likely to occur than discrimination, reporting of a patient’s undocumented status has been reported at least once in the media: in May 2017, immigration officials detained the undocumented parents of an infant requiring emergent surgery, with clinical staff being suspected of having notified officials.17 Finally, the AMA Code of Medical Ethics states that “protecting information gathered in association with the care of the patient … [and] respecting patient privacy in other forms is also fundamental, as an expression of respect for patient autonomy and a prerequisite for trust.”18 This assurance of privacy is necessary for open communication between patients and clinicians, and patient privacy is protected by the Health Insurance Portability and Accountability Act (HIPAA) of 1996.19

Under HIPAA, personal identifiable information can be shared with others in limited circumstances, such as for treatment, payment, or public safety, or as required by law (eg, by court order). Otherwise, disclosure of this information is generally only permitted when the patient consents.19 Clinicians should respect patient confidentiality by not disclosing information to law enforcement or immigration officials unless required to do so by court order.22 For example, patient disclosures of criminal activity, such as drug use, are not to be proactively reported to law enforcement.23 Patients should be informed of their rights under HIPAA and of limits on data sharing with outside agencies.

Documentation of immigration status could pose potential legal risks should immigration enforcement officials gain access to government or county health facility and public benefit program databases and target undocumented patients. Currently, this remains a theoretical possibility rather than a documented occurrence in the United States, but not in the United Kingdom where government sharing of National Health Service data with immigration authorities has raised alarm.24 Furthermore, immigration enforcement actions and access to law enforcement data have been documented to occur covertly in self-proclaimed “sanctuary” cities in the United States.25 Immigration enforcement at hospitals is unlikely, particularly given that enforcement agencies’ “sensitive locations” policies discourage such actions in clinical settings.26 However, enforcement near sensitive locations has been reported,1 warranting a proactive approach to ensure the safety and well-being of undocumented immigrant patients. The potential impacts of implicit documentation of immigration status in health records (eg, by describing patients as “ineligible for insurance” or “foreign born”) as well as explicit documentation remain unclear and merit further investigation and discussion.

It is also important to note that, in contexts beyond the clinical encounter, documentation of immigration status presents different considerations. For example, medical or psychological evaluations conducted with an immigration attorney for an asylum application might involve explicit reference to immigration status without necessarily conferring risk of detention and deportation, as these evaluations are protected by attorney-client privilege. In fact, in most cases, medical or psychological evaluations actually support better legal outcomes, as physicians are able to document the psychological or physical sequelae of violence or torture in the applicant’s country of origin.27 However, these evaluations are typically included not in the patient’s health record but in the patient’s legal paperwork.

Controversies over documentation of social data pertaining to stigmatized populations is not new, and history can lend insight into considerations of documenting immigration status. When HIV first emerged in the 1980s, clinicians grappled with how to record HIV status in health records given the intense stigma, discrimination, and even hostility—within and outside the health care context—directed toward those diagnosed with HIV/AIDS.28 Public health concerns about HIV transmission balanced against patient fears of disclosure led to highly regulated standards for consent to testing and for reporting to the Centers for Disease Control and Prevention. States often require written rather than verbal consent to conduct an HIV test and set higher thresholds for disclosing results to other clinicians.29 Although undocumented immigration status poses no public safety risk like HIV, the stigma surrounding immigration status could help inform how clinicians approach documentation.

Similarly, multiple state laws restrict health insurers’ use of genetic information to prevent potential employment- and insurance-based discrimination, and the Genetic Information Nondiscrimination Act of 2008 prevents insurance companies from financially exploiting asymptomatic patients based on genetic susceptibilities.30,31 As such, there is a higher bar for sharing pedigrees and other genetic information. Implementation of measures to reduce undocumented immigrants’ discrimination fears could also be considered.

Explicit documentation of immigration status of patients and their family members in a health record should be avoided, particularly when risks outweigh benefits and risks are rapidly changing, as they are within our federal, state, and local political and cultural contexts. If immigration status is needed to facilitate the patient’s receipt of services or resources, conversations with clinicians should be prioritized over written communications, or clinicians can use indirect language in the health record to describe social context (eg, “immigration stressors” or “ineligible for insurance”). Patients should be assured of confidentiality, informed of privacy laws, and invited to discuss their concerns. Regardless of immigration status, patients deserve to have their health care needs met without fear. The priority of clinicians and the health care system should be to create policies and guidelines that reduce stigma and discrimination for all patients. 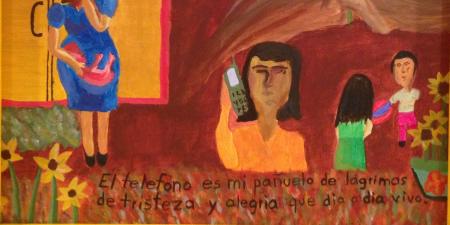 Journeys of Immigrant Families Across the Border 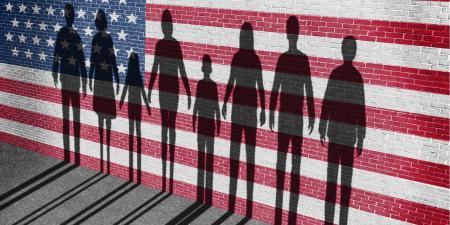