Our Duty to Homeless Veterans

My pager went off at one o'clock in the morning. I called the number—a group home—and the manager declared urgently, but simply, “They shot Jack. Can you come?” By the time I arrived, the coroner had left with the body. Jack was a homeless veteran with serious mental illness and alcoholism. On this cold night, he had been drunk, and, when told that he'd have to leave the shelter, he had no intention of complying. After Jack brandished a knife the manager judiciously backed away. Thinking the dispute was settled, Jack climbed into one of the beds, not knowing that 9-1-1 had been dialed. When a police officer entered Jack's room, Jack charged him, knife in hand. The officer didn't hesitate; he fired six bullets into Jack's chest, killing him.

Miraculously, only a few of the other residents were awakened. One was Jack’s roommate, also a homeless veteran, who, pressed into the corner of the room, watched the bullets fly by. Still shaking, he said, “There was no way Jack was going out into that cold. Not again. Not tonight. He went out like a soldier.”

We had a decision to make before morning: call a hazmat team to clean up the blood (this would cost thousands), or clean it up ourselves. Having worked with Jack for years, it seemed important that we do it, perhaps as a way of honoring him. At 4 a.m., with bleach in hand, I opened the window, turned Jack’s bedside radio on low, and in the cool, quiet morning cleaned up his blood and gathered his few personal belongings for his family.

The work I did with Jack did not occur within the Veterans Administration (VA) but at a local homeless clinic. Tragedies like this one, despite the challenge of enduring them, bind us to our homeless patients and their plight, which continuously recommits us to the work. Not coincidentally, I work for the VA now, and do so with pride.

The public is turning its attention to homeless veterans, partly in response to the Iraq War. Our country makes a promise to those who serve in our Armed Services—a promise derived from the words of Abraham Lincoln’s second inaugural address, “To care for him who shall have borne the battle, and for his widow, and his orphan.” Soldiers are the only group of citizens in our society to whom we promise health care for a lifetime. While we simultaneously fight two wars, the public is justified in wanting to know why a vet with serious mental illness must seek shelter in a group home or why a homeless man on a street corner holds a sign reading, “Homeless Vet—Please Help.”

The statistics are impressive and sobering. Veterans are over-represented among the homeless, at approximately one in four, whereas one in 11 Americans is a veteran [1]. The reasons are not yet clear, but that doesn’t stop us from asking, “What is the VA doing about it?” For starters, the VA operates the largest health care system in the world, serving a sizable segment of our population. Of the nation’s 26 million veterans, nearly three-quarters served during a war or official period of conflict. Approximately one-quarter of the country’s population is eligible for VA benefits and services because they are veterans, veterans’ family members, or survivors of a deceased veteran.

The VA operates 1,400 sites of care, including 155 medical centers, and VA services designed specifically for homeless veterans are growing. The Healthcare for Homeless Veterans program helps veterans get off the streets and provides them support services. Compensated work therapy supplies structured, supervised work. Assertive community treatment, peer assistance, and an array of substance-abuse services—outpatient to residential—are also available through a nationwide network of programs. The VA operates numerous “domiciliaries” that offer longer-term housing and skills training to help formerly homeless veterans make a successful transition to independent living. The overall success of the VA’s national network of care is outlined in Best Care Anywhere [2].

But the VA also represents arguably the second largest bureaucracy in the world (the Department of Defense being first). And, despite the fact that bureaucracies are designed to handle large numbers of people fairly, they are not known for being flexible or maneuverable, which can hamper efforts to meet homeless people where they are. Individuals sometimes become lost in the bureaucracy and do not receive the care intended for them. By way of emphasizing challenges such as this, consider these numbers: in Colorado we manage more than 400 vouchers that secure shelter, protection, and nightly services to homeless veterans—a commendable accomplishment. But the vouchers serve a fraction of the estimated 2,500 homeless veterans in our state. As VA physicians and staff, we want to be able to do much, much more.

Any physician who has cared for homeless people knows that their difficulties are often complicated and entrenched. It is important to recognize that homelessness is really only a partial descriptor—such a person is often jobless, undereducated, without family support, poor, and alone. Indigence—meaning the lack of health insurance—is a problem for the field of medicine to address; homelessness itself is a problem for society as a whole [3]. As physicians, it is important that we seek answers to why the problem persists.

In its list of nine principles, the AMA Code of Medical Ethics compels us to practice with compassion, to respect human dignity, honor the law, and accept responsibility for improving our communities [4]. Working with homeless people can sometimes make physicians doubt whether they are practicing ethically. I believe the contributors to this doubt are the powerlessness and confusion we feel when faced with overwhelming need. Not knowing what actions to take should never be confused with not knowing the right actions to take. Ethically, the choices we must make in providing care for a homeless veteran (or any person who is homeless) are relatively clear—such as whether a homeless person should be admitted to the hospital. Should that admission be involuntary? Does the person need a guardian? Should the family be sought out? Can we devote the time right now for this person’s obvious needs? I believe the answers to these questions hinge upon whether our health care system and society as a whole—not just the VA—is ready and willing to provide the full support necessary to create lasting solutions to these complicated issues. Homelessness is seldom cured with one hospitalization. So much more is required.

In his remarkable book, War and the Soul: Healing Our Nation’s Veterans from Post-traumatic Stress Disorder, Ed Tick reflects upon 30 years of counseling war veterans [5]. His experience has led him to conclude that posttraumatic stress disorder (PTSD) is not an anxiety disorder, as classified in the DSM IV. Instead, it is the expression of indelible change to one’s self and one’s soul as a direct result of experiencing war—and a reflection of our culture’s failure to honor, accept, and “cleanse” our warriors. Veterans on the streets, possibly thousands of them with PTSD, may represent a literal army of lost souls.

Underscoring the complexity of the problem is a 2004 finding by Mares and Rosenheck that fewer than one-third of homeless veterans identified their military service as the cause of their homelessness [6]. Their article also stated that the average lag time between discharge from the military and the first episode of homelessness was a lengthy 14 years. Veterans who did attribute their homelessness to their military service cited the reasons as being (1) a substance-abuse problem that began during the military, 75 percent; (2) inadequate preparation for civilian employment, 68 percent; and (3) loss of a structured lifestyle, 60 percent. Few of these causes can be interpreted as directly related to military life. We can question, then, whether veterans as a group share risk factors for homelessness beyond combat trauma alone.

Could we have spared Jack his violent death? It’s impossible to know for certain. We do know that alcoholism and chronic mental illness cause too many premature deaths and that treatment works when it is made readily available for those who want it. Our goal is to keep striving to help others like Jack. Otherwise, for what purpose are we here? The VA strives to accomplish more each day. Together, we must advocate for a comprehensive public and private health care system that promises care not only to veterans, but for all. 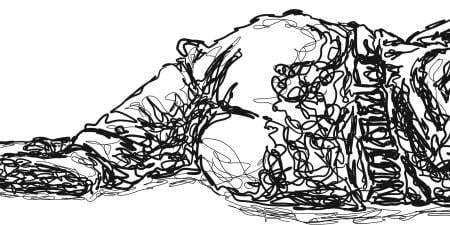