The disproportionate negative impact of the COVID-19 pandemic on Native communities is a result of transgenerational traumas—mental and physical—which have been ongoing and developing for centuries. This article considers 19th-century American visual and narrative representations of Native experiences of and responses to transgenerational trauma. This article also suggests ethical implications for Native American health of interpreting those representations and suggests an obligation to look on 19th-century White American artists’ romanticizations of Native experiences with humility.

Origins of the “Ghost Dance”

The year 1890 is frequently listed as the last—or penultimate—year on timelines documenting genocide of Indigenous people, often described as the “American Indian Wars.” After a year of continued violence and oppression, especially the forced confinement of Indigenous tribes on reservations, Sitting Bull, a great resistance leader of the era, was killed by Indian police on Standing Rock Indian Reservation in South Dakota.1 Only a few days later, up to 300 of the 350 Lakota men, women, and children gathered near Wounded Knee Creek were killed by US troops.2

Ralph Albert Blakelock painted Ghost Dance (the Vision of Life) between 1895 and 1897. The image refers to a communal dance known to have accompanied the teachings of a Numu healer named Wovoka, who, in 1889, claimed to have had a vision prophesying removal of Whites from tribal lands, the rising of Numu dead, and the restoration of a once-thriving Indigenous America.3

Figure 1. Ghost Dance (the Vision of Life), 1895-1897, by Ralph Albert Blakelock. The Art Institute of Chicago®. This information, which is available on the object page for each work, is also made available under Creative Commons Zero (CC0).

Wovoka’s prophecy grew into a spiritual movement that spread beyond his own community to other tribes, who found hope in the seer’s vision. The movement itself took on the name of the Ghost Dance, a ceremonial practice central to this new belief system. The Ghost Dance was accompanied by song (versions of which can be heard here) and was performed in a circle. As the song sped up, some participants entered a trance and separated to dance at the circle’s edge.4

Regalia of Resistance and Healing

Some tribes read warlike resistance into the Ghost Dance. This interpretation, inspired by the aggression and violence of tribal encounters with US soldiers, led many followers of the Ghost Dance movement to wear white shirts, known as Ghost Shirts, said to guard wearers from bullets.2 Dramatizations of people donning Ghost Shirts, and the Ghost Dance itself, appeared in newspapers and magazines5 and inflamed fear among Whites, who responded by pressuring the US military to suppress the Ghost Dance, to prosecute its Indigenous performers with new and brutal vigor,2 and to use hyperbolic rhetoric, both in text and image, to narratively and visually amplify White nationalist expansion that resulted in the killing of Sitting Bull, the Massacre at Wounded Knee, and so many atrocities of empire. Focused eradication of Native resistance came bloodily and swiftly in the 19th century but had begun centuries earlier when European traders first arrived on “American” shores. By 1890, genocidal eradication was fully expressing manifest destiny. It should come as no surprise that civilizations crushed by gun and cannon fire, industrialization, colonization, and infectious disease would have found solace in a spiritual dance of healing.

Today, writer Julian Brave NoiseCat describes Native Americans as “a postapocalyptic people.”6 He states: “[I]n a society built atop our graves, survival has become an act of resistance.”6  During the COVID-19 pandemic, Brave NoiseCat emphasizes that tribal nations have been hit especially hard. The Navajo Nation, which at one point had the highest per capita SARS-CoV-2 (the virus that causes COVID-19) infection rate in the United States, lacks running water and, like other impoverished and marginalized communities, suffers disproportionately from preconditions that make residents especially vulnerable to the virus and other illnesses.7 Legacies of poverty resulting from the forced migration, segregation, “reeducation,” disposition and resettlement, and other kinds of oppression prompted Wovoka and Sitting Bull to resist in the late 19th century, a time Brave NoiseCat calls “the last time Native life seemed on the brink of apocalypse.”6

Wovoka was a healer, so it is appropriate to consider the Ghost Dance a healing practice that medicine generated—in shared dance among bodies, minds, individuals, and identities shaped in multiple Plains tribal cultures—perhaps as a means of ongoing recovery from transgenerational trauma. Trauma experienced by past and present Native peoples can be considered from both ethical and aesthetic perspectives in American art of the 19th century. White artists’ narrative and visual representations of Native persons’ lived experiences, such as how Native people performed and developed the Ghost Dance and the spiritual movement it birthed, deserve careful consideration. This includes examining how these representations have contributed to romanticization of Native American spiritual and healing practices.

Blakelock himself, for example, probably never witnessed a Ghost Dance. When he painted Ghost Dance (the Vision of Life), he had not been out West for 20 years. His vision of Native life in this image is nostalgic for spectral dancers from a lost world. It is ethically and aesthetically important to acknowledge Blakelock’s vision of Native life as a fantasy. Although a fantasy, in and of itself, might not be ethically fraught, its source must be acknowledged as one perspective among many. This kind of humility must be modeled in our interpretations of White representations of Native lives lost so that elegiac fantasy does not obscure, erase, or dominate perspectives of those still in need of time and space to process trauma and grieve ancestral losses of loved ones and lands. Notably, the dark, close landscape and squat trees of Ghost Dance (the Vision of Life) have more in common with Italian Renaissance painting than with the gold and green grasslands of the American Northern Plains. Whose world and whose vision are represented is not an ethically or aesthetically neutral feature of Blakelock’s art, nor is our viewing of it.

Narrative art also calls us to consider humility as an ethical and aesthetic value in narrative representation. Alvan Fisher’s The Prairie on Fire was completed in 1827. It features an elder Natty Bumppo, the fictional hero of James Fenimore Cooper’s Leatherstocking Tales, protecting a White family from a fire set by ruthless Native warriors. Natty Bumppo was a White man who grew up among Eastern tribes, living and fighting alongside them. In the final book in the series, from which Fisher’s painting takes its subject, Bumppo has come West to escape the sound of trees being cut down for industry. He wants to die among the pristine wildlands he loves.

Figure 2. The Prairie on Fire, 1827, by Alvan Fisher. The Art Institute of Chicago®. This information, which is available on the object page for each work, is also made available under Creative Commons Zero (CC0).

The Art Institute of Chicago through prior acquisition of the George F. Harding Fund; restricted gift of Jamee J. and Marshall Field; Americana Endowment Fund.

Like Natty Bumppo, Fisher, Cooper, and Blakelock were White men. Regardless of whether their stories and images are sympathetic or even rendered with sympathetic intention, their  perspectives express desire to inhabit (exclusively) lands already inhabited and represent encroachment of White settlers, traders, thrill seekers, and military forces rather than the Indigenous communities who are these artists’ subjects.

Humility as an Ethical and Aesthetic Virtue

We might most charitably view the narrative and visual works of White artists of the late 19th century as products of their time. We might recognize that they might not have seen their representations as romanticizations at all or, even if they did, that they might not have recognized their romantic visions as capable of erasure of perspectives of Native people whose lives, activities, and experiences they sought to represent. But those of us who live today are not products of the late 19th century. Too often, past and present voices of the oppressed are unheard, even when their own histories are at stake. In this way, those histories are at risk of becoming lost, obscured, dominated, or erased, and experiences of transgenerational trauma—a process that seems to persist even postapocalypse—are at risk of being rendered invisible or silent. We must fulfill our ethical and aesthetic obligations to look on American art of our recent past, especially art by artists representing Native Americans past and present, with humility about the very act of representing and humility about each subsequent act of looking at what is represented.

Journeys of Immigrant Families Across the Border 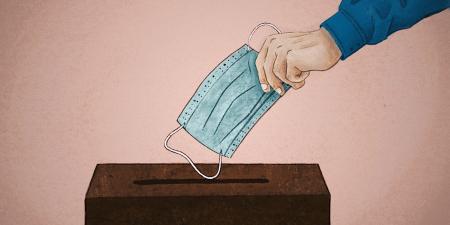