This article describes the perspectives of a scientist-patient and patient-caregiver when sitting for their portrait and also considers the value of this experience for facilitating healing and observation of patient-caregiver relationships.

When my husband Rob was diagnosed with nasopharyngeal carcinoma, we researched the best National Cancer Institute-designated comprehensive cancer centers in the country with specific strength in head and neck cancers. We decided on the University of Nebraska Medical Center and made his treatment our priority. We put our life on hold and moved to Omaha, where we stayed in the hotel in the hospital complex for 10 months.

The rooms were set up for extended-stay care. I could cook in the limited kitchen, which allowed us to control Rob’s exposure to potential infection from others while he was immunocompromised and weak. During this period, he underwent several rounds of chemotherapy and simultaneous radiation, and he was hospitalized briefly 3 times. We spent the Thanksgiving, Christmas, and Easter holidays in residence prior to the final neck dissection surgery in the spring.

Rob’s diagnosis had come only 3 months after I completed treatment for breast cancer. My breast cancer treatment may have been considered more disfiguring than Rob’s treatment. After a bilateral mastectomy and the administration of prescribed chemotherapy—which included doxorubicin, cyclophosphamide, and paclitaxel—I had 25 monthly intravenous infusions of pamidronate disodium (due to a questionable spot on my left calvarium). The chemotherapy was intense and not without complications. Yet, by comparison, Rob’s treatment was far more complex and difficult.

Rob’s diagnosis was a terrible blow; however, we were uniquely armed for this particular challenge. Rob was a researcher and professor of genetics. I had worked in several laboratories, so I shared his grounding in science. And, as a mother, I had years of practice being the observer and data collector for—and communicator to—the professional medical community. I had developed partnerships with physicians that involved mutual understanding and appreciation. We felt that we had the advantage of feeling comfortable in the medical environment, and we each had medical teams who saw us as unique individuals. We planned to survive.

We were offered the opportunity to participate in the Portraits of Care study through William Lydiatt (a coinvestigator in the research). He introduced us to artist Mark Gilbert during one of our follow-up visits, which typically involved a few days of appointments with Rob’s medical team. Mark’s studio in a nearby lab allowed patient-subjects to conserve their energy and include convenient portrait “sitting time” in their clinic visits. Ours is the only canvas in the study that includes 2 subjects. It speaks to our partnership, reciprocal caregiving, and marriage. We took traditional wedding vows that hold “in sickness and in health” and “for better or for worse.” And we certainly felt that we understood and had thoroughly tested the meaning of those promises. By the time of our first sitting for the portrait, Rob was 6 years into his recovery, and during that time we’d managed a few complications, including a mastoidectomy and a stroke. We were also experiencing more normalcy. Rob had resumed responsibility for his research program and accepted the position of director of the Johnson Cancer Research Center at Kansas State University. We were feeling fortunate to be entering this new stage of life.

I came to the initial portrait sitting fully prepared, with photos of both of us taken prior to and during treatment. Instead of using those materials, Mark helped us find a comfortable position and asked us to relax and simply focus on being present in the moment.

Having the portraits done in a laboratory at the medical center was particularly beneficial for us. Given our background, this was certainly a space we recognized and felt comfortable in! There were windows facing south, and the light was inviting for both the subject and the artist. The laboratory was filled with canvases and art supplies rather than the normal equipment and associated noise. There was charcoal dust on the floor and no lab glassware on the drying rack. On our first visit, those were the details we noticed and discussed with each other and with Mark. But, over time, sitting for the portrait in this space became a time of quiet reflection. We developed a camaraderie with other portraits progressing in the studio. We knew some of the other subjects from outside the context of the studio. Others became familiar through in-progress drawings of them, and, over the weeks of the study, some drawings clearly reflected subjects’ improvement. In much the same spirit as a gallery experience, I felt that the subjects, via the portraits, observed and connected with us. This connection seemed symbolic of humanity in the clinical setting.

We had not anticipated Gilbert's sensitive insight.

This introspective time allowed Rob to focus on and internalize the magnitude of the impact of head and neck cancers on the individuals and their appearances. He became one of many who had undergone treatment. He was well aware of the discomforts, but he now fully realized that he had escaped disfigurement. The art allowed him to see the mass of patients as individuals and to connect as part of that community. All of these observations contributed to his feeling of well-being. Rob described this introspective time as a “bridge” during recovery for him.

It is vitally important for their survival that patients find methods to promote feelings of well-being and a positive self-image. As a life-long runner, my moments of meditation and self-awareness are associated with the repetitive aerobic exercise I enjoy. After my own cancer treatment, I learned to employ new techniques, such as biofeedback and visualization, until I could safely return to a version of my preferred routine. Portraiture, a sensitive and innovative approach, provides a new lens and perspective for the patient-subject. The Portraits of Care study opened new dimensions of self-awareness for us as well as for several other participants.

We observed Gilbert’s powerful ability to capture nuances in a subject’s physical and emotional status as we compared notes after a sitting. Although the observational facts were present, the art brought the human condition to the science and the medical protocols. We had not anticipated Gilbert’s sensitive insight. We discovered that our portrait enabled Rob and I to identify elements in each other that we had simply not been able to see in our daily life together. In the portrait, my strong public exterior was overshadowed by a waifish vulnerability, and Rob’s face reflected a survivor’s reconciliation of past hardships with the reality of life in the present. We realized that others could really see us. We also saw an affirmation of our partnership in life. We had a deep mutual understanding of each other and of the basic ways we addressed and handled both opportunities and adversities. The observations mirrored in the canvas were good predictors of our ability to enjoy the remaining years of Rob’s life and to find unique solutions during challenging moments.

Over the years, the portrait reminded us that life is finite. We were always cognizant of the importance of each of us caring for our joint physical and emotional health. We had each endured significant wear and tear, which was captured in our portrait. These realizations, combined with the loyalty of our relationship, helped us have frank and productive discussions with our legal, financial, and medical advisors as time went on and during the period of Rob’s declining health. These conversations were not always easy for the professionals initially. However, they soon came to realize that we had a healthy respect for and comfort with our own mortality, which seemed a natural outcome of our many dress rehearsals with death. We eventually arrived at some innovative solutions in many areas that our aging population faces.

At the time of our participation in the Portraits of Care study, we had taken turns as patients and caregivers for a decade. In 2006, we had attended a prior exhibit of Gilbert’s in Omaha called Saving Faces: Art and Medicine.2 We found the images powerful, and we were impressed by the insights they communicated about the physical and emotional state of the subjects. When we were asked to participate in the art-based research study, we were honored and interested in the outcomes. We also had the feeling that we were participating in a project for the greater good in the same spirit as participating in a clinical trial. In particular, Rob appreciated that his medical team really treated him as a unique individual. His hope was that participation would further foster that value of patient centeredness in the training of current students. For him, this study seemed like an opportunity to embrace an enhanced level of care. I hoped that my participation in the study would benefit patients and their partners in care during their transition from clinical treatment to their “new life.”

We would see our portrait where it was displayed for some years in the head and neck clinic. The canvas is life-size and always had an impact on me. At times, I felt very positive about and proud of our path and participation. This feeling was highlighted when the exhibit was displayed and used for studies at Interlochen Center for the Arts, one of top arts centers in this country.1 On other visits, I appreciated that I had seen and accepted the vulnerability mirrored in our canvas, and I believe this acceptance of vulnerability had enabled me to know when to ask for help. To be fair, however, there were times when viewing our images reminded me of the anxiety and discomfort of the treatment experience. The vulnerabilities I could see in the art were simply an ongoing part of our physical lives. For Rob, long-term radiation damage resulted in balance and swallowing issues. My case would warrant surveillance for cancer metastasis or recurrence.

The “sitting experience” was insightful and expanded our coping skills. It added a depth and dimension to my life experience. The canvas provided a sensitive and revealing look at myself and my husband as individuals and as a couple. It had a lasting impact on our lives in reflecting the fact that we were united by 50 years of life together yet had individual needs. This visual reinforcement helped us to find creative solutions for appropriate residential options and end-of-life decisions. The piece that came from the project tells our story and helped us process our medical journey in a way that I believe only art can. 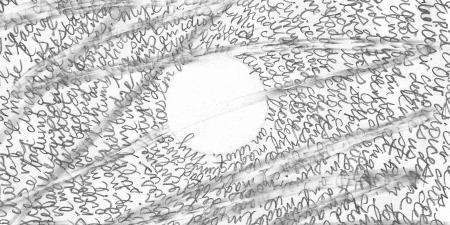