Gabino Olvera is a 42-year-old man who is mentally ill, paraplegic, and homeless. He was dropped off by Hollywood Presbyterian Medical Center in a soiled hospital gown with a catheter bag and no wheelchair in a neighborhood populated by many other homeless people [1]. Carol Ann Reyes, an elderly woman suffering from dementia, was dropped off by Kaiser Permanente Bellflower Medical Center in front of Union Rescue Mission, an organization that serves the needy and homeless, wearing just a hospital gown [1]. This practice is known as “patient dumping.”

Patient dumping violates the federal Emergency Medical Treatment and Active Labor Act (EMTALA). Enacted in 1986, EMTALA seeks to prevent any refusal of care for patients who are unable to pay [2]. It imposes three requirements on any Medicare-participating hospital and enforces monetary sanctions against physicians or hospitals that do not comply [3]. Participating hospitals must: (1) conduct medical-screening examinations, (2) provide necessary stabilizing treatment to any patient seeking emergency medical care in an emergency department, and (3) hospitals that are unable to do (1) and (2) may transfer the patient to a facility that can provide those services in a manner that accords with EMTALA guidelines [4].

To establish a violation of EMTALA, “a plaintiff must demonstrate that (1) the hospital is a Medicare-participating hospital covered by EMTALA that operates an emergency department (or an equivalent treatment facility); (2) the patient arrived at the facility seeking treatment; and (3) the hospital either (a) did not afford the patient an appropriate screening to determine whether he or she had an emergency medical condition, or (b) bade farewell to the patient (whether by turning away, discharging, or improvidently transferring him or her) without first stabilizing the emergency medical condition” [5]. Forty-three of the 50 states have adopted statutes similar to the federal requirements [6-9].

Despite these statutes and penalties, hospitals have continued turning patients away. From 1996 to 2000, the watchdog organization Public Citizen confirmed violations from 527 hospitals in 46 states, as well as the District of Columbia and Puerto Rico [10]. Of the 527 hospitals, 117 had violated the act more than once, and for-profit hospitals were significantly more likely to do so [10].

EMTALA's inability to curb denial of treatment has been attributed to the ambiguity of the statutory provisions, poor enforcement mechanisms, and divergent judicial interpretations of the statutory provisions. A 2001 Office of the Inspector General (OIG) study revealed that emergency-care personnel and hospital staff are often unaware of EMTALA provisions and policy changes, and, even when they are aware, there is uncertainty about the proper interpretation and application of the provisions [11]. Furthermore, most emergency personnel do not receive EMTALA guidelines [11].

Lack of uniformity in enforcing the provisions also contributes to their ineffectiveness. Some hospitals have a greater chance of being investigated than others, not because they are more prone to violate EMTALA terms, but because they are geographically closer to Centers for Medicare & Medicaid Services (CMS) regional offices [11]. The EMTALA enforcement process fails to notify hospitals that are at risk for violating the proper standard of care, and regional CMS offices often don't inform state survey agencies, hospitals, and peer-review organizations about their decisions [11]. Thus, statistics on violations are often inconsistent and incomplete.

Judicial decisions have also produced conflicting interpretations of what emergency personnel must do to comply with EMTALA. The EMTALA requirement that emergency personnel provide appropriate medical screening within the capability of the emergency department, for example, can be interpreted under an objectively reasonable standard, subjective standard, or burden-shifting standard [12-14]. There is discrepancy about whether physicians should be held to the negligence standard of care customary in the medical field, or whether EMTALA is governed by a strict liability standard [15]. Finally, disagreement persists over whether the three duties imposed on medical personnel—to provide an appropriate medical screening examination, to stabilize, and to appropriately transfer patients—are separate duties that should be considered individual causes of action under law or whether they should be viewed conjunctively [16, 17]. The divergent standards of judicial interpretation further hamper EMTALA's effectiveness by creating inconsistent standards of compliance. Emergency personnel are not able to comply with EMTALA provisions because it is not clear what exactly is required of them, and case law has only exacerbated the problem.

Despite EMTALA's shortcomings, the statute is not without bite. The OIG recorded eight violations of EMTALA in November 2008 [18]. Baptist Hospital, Inc., in Florida, agreed to pay $22,500 to settle allegations that it failed to perform a medical screening on a suicidal man. After informing the registrar that his suicidal thoughts were growing stronger, the patient was informed that he would have to continue to wait—he then proceeded outside and lacerated his right arm [18]. Cumberland County Hospital System, Inc., in North Carolina, agreed to pay $42,500 to settle claims that it unsuccessfully provided appropriate medical screening or stabilized a suicidal 13-year-old girl. The physician saw the patient for 5 minutes before releasing her. Fifty minutes later, the patient jumped out of a car traveling approximately 40 miles per hour and fractured her skull [18].

Recent cases in Los Angeles demonstrate that the threat of large fines might deter the practice of patient dumping under state law. The Los Angeles City attorney secured a settlement with Methodist Hospital amid allegations of patient dumping that required the hospital to implement detailed protocols for the discharge of homeless patients. The hospital will also contribute $215,000 to fund recuperative care beds for homeless individuals at the Salvation Army's Bell Shelter and pay $5,000 in civil penalties and $20,000 in investigative costs [19]. Kaiser Hospital reached a similar agreement in May 2007, resulting in court-ordered protocols for the proper discharge of homeless patients, as well as $500,000 in donations to a charitable foundation that offers services to the homeless and $5,000 in civil penalties [19].

In response to recent incidents in California, Los Angeles passed a city ordinance that prohibits transporting or arranging for the transport of patients to somewhere other than their home without their written consent [20]. A violation of the ordinance warrants a $25,000 penalty for the misdemeanor and the suspension of the hospital's Medicare finding for at least 5 years [20].

The underfunded health care system in the United States drives the practices of patient dumping and refusal of care. Caring for patients who do not have insurance is costly, and much of the treatment often goes without reimbursement. From 1994 to 2005, the number of emergency department visits increased 18 percent from 93.4 million to 110.2 million annually, a rate that coincided with the rising costs of care and lower reimbursement by managed-care organizations and other payers, including Medicare and Medicaid [21]. The trend disproportionately affects low-income patients, who generally do not have access to health care and often seek it in emergency rooms. In response to the rising costs of medical care, states have implemented a series of measures directed at lowering costs, including reductions in Medicaid eligibility, benefits, and provider payments [22]. As Clay Mickel, spokesman for the American Hospital Association, stated, “The real problem is that the government has not acknowledged that caring for the indigent is its responsibility” [23]. The solution to patient dumping may lie in addressing its root causes rather than strengthening the enforcement mechanisms in EMTALA and similar state statutes. 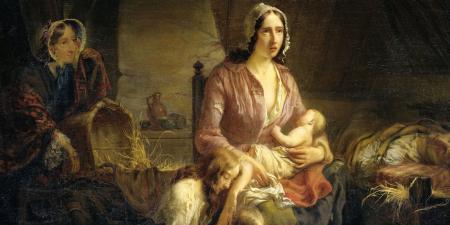 A Mother and Infant with No Home