Neurofibromatosis, a genetic disorder that occurs in 1 in 3000 births, can cause tumors to grow anywhere on or in the body. The first author (RM), an artist-researcher and mother of a son living with neurofibromatosis, has painted and exhibited more than 200 portraits of people living with neurofibromatosis to raise awareness of and resources for this little-known disorder. Among many stories shared through RM’s works is the story of Ashok, a Nepali man who has undergone 3 surgeries to remove facially disfiguring tumors that developed as a result of neurofibromatosis. This article analyzes portraits of Ashok and interviews that the senior author (RI) conducted with Ashok and RM during each phase of his surgical process to present a case study of their lived experience at the intersection of art and medicine that illustrates the power of portraiture as medicine.

Painting a Picture of Neurofibromatosis

Neurofibromatosis (NF), a genetic disorder that occurs in 1 in 3000 births, can cause tumors to grow anywhere on or in the body.1 NF can affect the development of bones and skin and can cause learning disabilities as well as vascular issues, deafness, paralysis, blindness, cancer, and even death.2 The first author (RM), an artist, activist, researcher, and mother of a son living with NF, has painted and exhibited more than 200 portraits of people living with NF to raise awareness of and resources for this little-known genetic disorder.

Among the many stories shared through RM’s works is the story of Ashok, a Nepali man living with NF who came to the United States for facial tumor removal and reconstruction. RM’s body of work, including Ashok’s biography and portraits, has been featured in multiple exhibits and installations: Neurofibromatosis: The People, at the Albrecht-Kemper Museum in St Joseph, Missouri3; Many Faces of Neurofibromatosis, at Washington University School of Medicine in St Louis, Missouri4; Portrait of a Disorder: Neurofibromatosis, at Creighton University’s Lied Art Gallery, in Omaha, Nebraska5; and Many Faces of Neurofibromatosis at the Norfolk Arts Center in Norfolk, Nebraska.6 We analyze RM’s portraits of Ashok and transcripts of 2 interviews conducted with both RM and Ashok to present a case study of the lived experiences of Ashok and RM, which illustrates the power of portraiture as medicine in addressing NF.

The NF community is global and often stays connected through Facebook, where people share pictures and stories of diagnosis and management of, and life with, NF. When interviewed by the senior author (RI), Ashok explained, “many people know me … all over in different countries … from my story on Facebook.” In 2016, still in Nepal, Ashok uploaded his story on Facebook via video. RM saw it when a mutual friend posted it. With Ashok’s permission, RM painted his portrait by stopping the video at a certain point to clearly see his face. In an effort to promote awareness of his story and to support a United Kingdom-based GoFundMe campaign for Ashok, RM shared Ashok’s first portrait on Facebook (See Figure 1).7 Ashok shared his story, the campaign, and this portrait through Facebook with approximately 3000 friends across the globe. As a result, the GoFundMe campaign raised enough money for Ashok to obtain a medical visa to come to the United States in 2017.7

In January 2018, RM met with Ashok and other friends in Omaha, Nebraska, to start a new campaign to raise funds for his medical bills.8 Since his arrival in the United States, Ashok has undergone 3 transformative surgeries performed in Chicago, Illinois, and RM has created portraits of Ashok after each of these surgeries. Ashok’s first surgery in March 2018 removed over 80% of the tumors on his face, making it possible for him to use his mouth to drink through a straw. Once he had recovered from the surgery, Ashok traveled back to Omaha, Nebraska, to meet RM in person and sit for a second portrait (See Figure 2).

Both RM and Ashok were interviewed together by a journalist and RI with help from a Nepali friend and translator; RM’s second portrait and insights gleaned from the interview were shared in the news media to continue raising funds in support of Ashok’s second surgery.9 In the interview, Ashok described how even though the surgery made his face feel tighter and less natural, it helped him hear, eat, and breathe better. He also affirmed that he was “happy about what Rachel has done” in painting not only his portraits but also those of others. He explained that, in Nepal, NF has been considered a “sin” or a “curse extending through many lives” and that “people didn’t know what it was.” He said, “people would point at him and ask questions or laugh or make fun…. It was an unpleasant experience.” His experience in the United States has been much different, and he recalled being recognized by people he had never met before but who had seen his portraits and who called him “like a brother” by his Nepalese name, saying “Ashok Dai.” He explained that seeing his own image makes him “recognize” and “appreciate” how “the portraits played a big role in people knowing about my [his] case and raising funds.”

“People didn’t know what it was, people would point at him and ask questions or laugh or make fun…. It was an unpleasant experience.”

Ashok underwent a second surgery in July 2018. Additional work was done on his cheek and mouth to continue to strive for more symmetry in his face. RM illustrated this facial alteration and Ashok’s holidays spent with another couple (both of whom also have NF) in a subsequent portrait (See Figure 3).

In June 2019, Ashok underwent what he hoped would be his last surgery. In this third surgery, the remaining tumor was removed; his lips, nose, and eye socket were resized; and a prosthetic eye was fixed into his eye socket. After his recovery from surgery, RM and RI visited Ashok in Chicago, where he sat for another portrait. At this time, RI conducted a second interview with RM and Ashok in which Ashok discussed how differently people treated him after he received the prosthetic eye. Ashok explained, “People are looking at me. They had never looked at me before I received this eyeball. But, now … everyone … they look at my face. On the bus, in the road, everywhere … they look at me.” Ashok’s portrait after his third surgery portrays his smiling face with 2 brown eyes and a mirror reflection behind him (See Figure 4).

Figure 4. Ashok Holding up the Bean, by Rachel Mindrup, 2019

Ashok and RM have worked together for more than 3 years to bring NF into view, creating portraits to raise awareness of NF and collecting resources to support NF education, treatment, and research. RM explained, “It’s my job to make sure that everybody knows about NF.” She added, “I think sometimes we don’t want to talk about it. With Ashok … people see the tumors, so of course they know. But with my son, his tumors are internal. It’s hard to raise awareness about something unseen. And, at the same time, I can’t do portraits of just Ashok and tell everybody that’s what NF is.... I have to paint and draw as many portraits as possible to show you that there is actually no portrait to NF” (See Figure 5).

Ashok described the challenges of living with NF, explaining that most people with NF feel uncomfortable in society and face discrimination on many levels. He explained that “life is difficult” and that he hopes the portraits will encourage people to “be more caring.” Ashok is grateful that through the publicity inspired by his portraits, he has made thousands of friends, become a part of the NF community, and helped raise awareness of and support for NF. He said that people who see his portraits often befriend him, sending him messages of encouragement and donating to his cause.

Educational and Personal Value of Portraiture

Ashok and RM also have more specific goals. Ashok believes that his portraits, in serving to educate people about NF, “will help people understand … that anyone can have a genetic disease,” and he hopes this understanding will promote “equality to all” and more opportunities for people with neurofibromatosis to enjoy living, learning, working, and playing in society. RM hopes for “a cure.” RM works with the Children’s Tumor Foundation, the Neurofibromatosis Network, and Neurofibromatosis Central Plains to share portraits of people with NF like Ashok with elected officials in Washington, DC, “so that they can see … why it is important … to let researchers do the important work they are doing” toward finding a cure for NF. Together, RM and Ashok have shared Ashok’s story, developed friendships and fellowship through NF advocacy, lobbied for policy changes, and raised over $100 000 by sharing portraits of NF. Ashok explained that what they had accomplished was not done alone, and he added that he is incredibly thankful for his “friends and all of the donors from many countries, especially the people of Omaha” who “loved, donated, and inspired me along my medical journey.”

When asked which image he liked the most, Ashok said, “I like the first one,” adding that it holds a “memory” of the beginning of his relationship with RM and the first time in his life that anyone had drawn his picture. When asked how he felt about this portrait, he said, “from the heart … it is extremely good.” He is “content about the way it is,” and commented that “the portrait has a positive impact on my [his] identity” and that when “someone who does not know me [him] sees that painting, they know about me [him].” That said, Ashok likes all of his portraits, and he explained that “art is something that attracts your attention. When you see it, you are taken, you are drawn to it,” and “in this particular case, people come to see not just art, but they are aware of the presence of NF in the art, so people are left feeling something about this cause. It is very powerful, this art.” 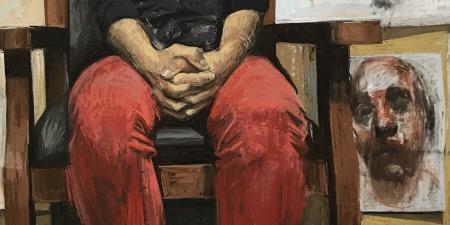 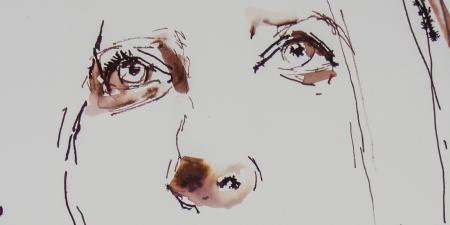