This article describes one collaborative arts-based research project. Portrait artist Mark Gilbert considers lessons for art and healing from one patient, John, whose cancer and portraiture experiences illuminate features of ethical and aesthetic significance about what it means to witness—to regard another’s difficult health and health care experiences.

As an artist-in-residence working with patients and caregivers, I became acutely aware of how relationships and interactions between subjects and me generated the process of making portraits. These relationships and interactions inspired me to further my arts-based research in another project, The Experience of Portraiture in a Clinical Setting (EPICS).1 EPICS sought to explore artistic interactions and shared experiences of such interactions when I painted portraits of patients from the Head and Neck Cancer Clinic at the University of Nebraska Medical Center. The portrait, John, enables investigation of ethical and aesthetic roles of portraiture in John’s experiences of navigating depression and cancer.

From the beginning of the first session, John was demonstrative and spoke a great deal, especially during our breaks. He seemed enthusiastic: “I feel like we are doing something beneficial.” Yet, it seemed to take everything he had for him to show up. Often, he felt too depressed to sit for me in the studio. When he did, however, he was frank and open about his experiences. He told me he suffered from depression, which was exacerbated by the isolation he felt following his cancer diagnosis. He lamented that, even with a solid support system of family and caregivers, he often felt extremely alone. He described cancer as “a devious, insidious disease” and the radiation treatment as “a very difficult experience” of having teeth pulled, dry mouth, and “messed up” taste buds.

John had spent most of his life in the military. His promotion and status were something in which he took great pride. He brought a military bearing—decorum, discipline, and dignity—to many different roles he played in his life.

During our studio sessions, John movingly spoke about being a son. He had, for example, transitioned his elderly father into a nursing home before his father died and had done the same for his mother, who was diagnosed with “awful” Alzheimer’s disease. John asked me about the EPICS study, my life, my family. The vibrancy of our dialogue was laced with sadness, as John repeatedly recounted the stresses of his illness and described physical effects of his treatments. These poignant moments were counterbalanced by John’s determination to regain the sense of physical integrity he felt he’d lost during his treatments. He was acutely aware that physical exercise enhanced his emotional and spiritual health. He described his need for control and how the lack of control he felt while being ill added to his stress. I was reassured when he said that choosing to participate in the EPICS study did not make him feel out of control and that he found the process purposeful, calming, and comforting. He explained: “I think it was a little bit of a healing process, because I went into this neutral and I started thinking about positive things, and I was not worried about my state of health or anything.”

Drawing patients like John required me to aspire to a participatory, empathetic approach to the portraiture process.

My anxieties about exacerbating John’s unease were further assuaged by John’s curiosity about how he would be portrayed. This was a major factor in his decision to participate in the EPICS study. He considered what the portrait might communicate and sought to identify the difference between looking in a mirror and looking at a portrait of oneself. He acknowledged the subjective aspect of portrait making, saying he hoped to be able to—and anticipated being able to—see himself through my eyes: “What does John look like?” He added, “I am not expecting flattery.” He felt the portrait would have an “aura” that his reflection in a mirror didn’t have. On viewing his portrait at the end of his first sitting, he said forlornly, “I look sad.”

At our final meeting, John said that the portrait captured him as he is today, in a realistic manner. He no longer thought the portrait made him look sad. Instead, he said, “I think I look tired.” At the same time, he felt that the portrait “reinforces that I don’t feel like that. I feel better. I feel more alive. I feel more enthusiastic.” Referring specifically to his cancer treatment, John said, “I am through that. And, I am not dwelling on it.” John said he would like people to see his portrait and say to themselves, “That guy’s still alive, he survived, that guy.” Weaving John’s narrative together visually revealed meaning that might require pages of written material or hours of speech to convey.2

Ultimately, John stated that sitting for his portrait “helped” him with his depression. Reflecting on how he felt at the beginning of our sessions together, John acknowledged that sitting for his portrait diminished his feelings of isolation and engendered camaraderie with me and with others whose portraits hung in my studio at the time. He explained:

I have enjoyed it. It has been of value to me. Just like sitting in here today, seeing all these folks [the portraits] who have gone through something that might or might not have been as serious as mine. It gives you a little bit a feeling of fellowship. It gives me a broader perspective of what I have gone through.

When drawing John, I did not think in words. I thought in lines, smudges and tone, mass and volume. The charcoal I used gave form to abstract ideas, thoughts, emotions, tensions, associations, and reflections. In choosing to draw John instead of painting him, I immersed myself in an art practice that provided me more opportunity for self-reflection. That is, drawing allowed me to orient myself in the presence of John, which brought me closer to him. Our unfolding relationship guided the marks I made on the paper, but it did not mean that every mark had to be perfect. It meant I strived for every mark to move the drawing closer to what it was becoming.

Prior to EPICS, I’d learned as an artist to detach and disengage from subjects. Drawing patients like John, however, required me to aspire to a participatory, empathetic approach to the portraiture process. I respected and had faith in John’s and my other subjects’ perspectives, and I allowed them to guide and support me as we created the portrait. Suggesting how portraiture can help us forge connections with each other, Sara Lawrence-Lightfoot and Jessica Hoffmann Davis state: “It is through relationships between the portraitist and the actors that access is sought and given, connections made, contracts of reciprocity and responsibility (both formal and informal) developed, trust built, intimacy negotiated, data collected, and knowledge constructed.”3 Given John’s experiences of depression and how hard it was for him to show up sometimes, this notion of reciprocity was particularly important in my relationship with him. That is, when he did show, I knew it took him courage and fortitude to do so; therefore, I needed to be present with him.

John Berger also offers a helpful description of artist-subject connections in portraiture. He suggests how each mark and accent one draws when making a portrait is like a “stepping-stone” across a river4; in working on John’s portrait, I sometimes went sideways; sometimes, I backtracked. Every so often, I would step back and reflect on where I was and start again. I corrected and refined, the drawing would expand and contract, almost as if it were breathing. When I started the drawing of John, the early image looked almost like an exploded diagram. Features of John’s head were there—his ear, nose, and mouth, for example—but they were not connected. The picture seemed awkward and flat. As I observed John over time, the drawing went through an iterative process of refinement: I encouraged the drawing to slowly fold in on itself, allowing the elements to float towards one and other. There then came a point at which the portrait and its tension with the background seemed to oscillate in such a way that the drawing came into its own as an independent form, generating its own space and reality.

In art research terms, Tom Barone and Elliot Eisner explain that meanings are derived from art’s capacity to “adumbrate” rather than denote.5 The arts’ usefulness comes not from their capacity to make propositional claims about events but rather from their capacity to invite audiences to experience aspects of the world that could otherwise remain unseen or beyond reach. John and the processes of creating it facilitated expressions, visual and verbal, that otherwise might not have been given space to breathe. The resultant image becomes a means for participant, artist, and viewer to reflect on, interpret, and behold our mutual witnessing. John’s stories, through their telling, were interpreted and filtered through my perspectives and ultimately reshaped and reformed through my being with him, listening to him, and representing his story visually. His portrait is a tangible and permanent representation of our mutual witnessing of each other carrying out the project together.

The portraiture process, especially in a clinical context, involves ethical and aesthetic considerations. When I began working with patients and their families, sometimes during their most traumatic times, I was deeply nervous; I assumed their burdens would be exacerbated by my presence, that I might just make their experiences worse. My anxieties were compounded by my own fears of illness, disease, and mortality, which prompted me to call into question my capacity to function on a day-to-day basis, let alone perform as an artist. I was dubious about whether it would be possible to nourish my capacity for expression and creativity while, at the same time, expressing appropriate regard, respect, and sensitivity for a subject’s illness experiences. However, as my relationships with subjects strengthened, my anxieties diminished. John’s and others’ generosity and engagement freed me to focus on visually amplifying subjects’ strengths while also wondering sometimes how they managed to face their illnesses’ and treatments’ demands.

Parallels Between Art and Medicine

The parallels between artistic practice and the humanistic practice of medicine are these: both entail relationships, integrity, compassion, altruism, empathy, and respect for others.6 The importance of entering into collaborative, reflexive relationships applies to both patient-clinician relationships and subject-artist relationships. Drawing John required me to act with purpose and care, much like an effective and efficient clinician. I listened to, witnessed, and respected John’s stories. I paid close attention to innumerable details—some specific, others more nebulous—such as strands of hair; folds of his t-shirt; facial, vocal, or postural expression changes; the slope of his eyelids; and shadows under his chin. I tried to sustain a nonjudgmental stance and practice mindfulness when he spoke about his illness, treatment, recovery, parents, children, or puppy.

Just as clinicians delivering care in rooms adjacent to my studio listen to patients’ stories, so John and I worked through the portraiture process attuned to John’s story. In our own ways, John and I both experienced the tension between trying to control the process and trying to surrender to it and trust it. We approached portraiture much as I do an empty canvas, not knowing the end at the beginning.7 Although John initially felt unsure about sitting for his portrait, cancelled our first appointment, and sounded low, his voice trembling, when he called to cancel other appointments, he finally came often enough for us to create together, to complete his portrait. He sat before me to be drawn and I drew.

How Portraiture Can Help Build Therapeutic Capacity in Patient-Clinician Relationships 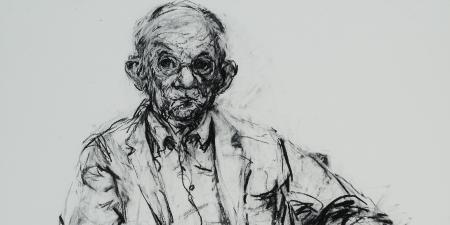 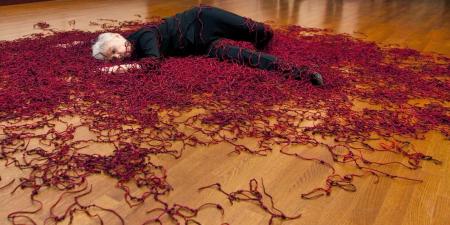 Visual and Narrative Comprehension of Trauma