How should we illuminate psychological sequelae of trauma? This article argues that though art is assumed to be useful as an intuitive means of representation, its usefulness in offering insight into trauma depends on accompanying narratives. Four artists’ works considered herein illuminate how the synergistic interplay between art and expository input from personal narratives can augment comprehension of trauma.

How should we illuminate psychological sequelae of trauma? Language is one way to express the inescapable pathos of tragedy. Another approach is to quantify the somber reach of misfortune through descriptive and inferential statistics. Neither approach, however, is without limitations. Psychological data are necessarily selective, sampling is often compromised, disclosure is constrained, and memory is constructive. If, indeed, our preferred methods for articulating and understanding the emotional impact of trauma are inherently circumscribed, it seems prudent to recommend alternative strategies that might also advance this goal. Although art is not usually associated with the inflections of tragedy, artistic imaginations charred by adversity can nonetheless affectingly illustrate how artworks animated by trauma can facilitate insight into and empathy with the trials and tribulations of others’ suffering.1,2,3

The Native American artist Luzene Hill’s 2012 installation, Retracing the Trace, is a case in point.4 Hill uses numerous metaphors of rape to emphatically demonstrate how sexually victimized women are routinely shamed into obligatory silence by apathetic cultures. The ultimate power of Hill’s artwork, however, is in its chronology. This installation reenacts Hill’s own experience as a rape victim. She lays down on a gallery floor where blood-red, Khipu-style knots are scattered around her body. When Hill arises, she leaves an imprint comparable to the impression that her body made in the mud after she had been brutally sexually assaulted in a park. Viewer awareness of this accompanying narration—which we characterize as any input powerful enough to transform how artworks are perceived5—clearly impacts how Hill’s installation is experienced.

Narrative input is also critical for Holocaust memorials. It is the “unfathomable story lines” in conjunction with the “ghastly artifacts” that mobilize their didactic and “aesthetic power.”1 One question, then, is how? We next consider how narration, or expository input more generally, can make a difference in our experience of artworks or memorials.

When looking at 2 paintings purportedly created by Rembrandt, Nelson Goodman asked, is there a difference in how they are experienced if we learn that one of them is a forgery? Absolutely, Goodman asserted, because information has the capacity to alter cognitive and perceptual judgment. Even a sliver of knowledge—the conveyance of a single word, for instance—had the power to modify and differentiate the experience of looking at Rembrandt’s paintings.1,6

Wojnarowicz had photocopied the portrait of Arthur Rimbaud that appeared on the cover of Rimbaud’s book Illuminations. He then used the photocopied image to make a life-sized mask. Once the mask was created, Wojnarowicz photographed friends and lovers wearing the Rimbaud mask in various locations throughout New York City.

Does it matter whether the viewer knows anything about Arthur Rimbaud?... The mask itself is not distinctive. Rimbaud looks like almost any late 20th century white male New Yorker. What if the viewer knew that Rimbaud was a prominent French poet, who also happened to be gay? Would that effect how these artworks are encountered? What if the viewer finds out that Rimbaud died at 37 years of age, the same age at which David Wojnarowicz died? Or that Wojnarowicz and Rimbaud were born nearly 100 years apart, September 14th, 1954 and October 20th, 1854, respectively? Has the viewer’s aesthetic judgement been modified by any, or all of this knowledge…? If so, what are we to make of all of these nuances in how we perceive Wojnarowicz’s artwork?

To further this line of questioning, what if the viewer also knew that Wojnarowicz had created an artwork in 1982 titled Peter Hujar Dreaming/Yukio Mishima: St. Sebastian.… Mishima’s breakout second novel was Confessions of a Mask (1958), whose main character is gay, like its author.... Would any, or all of this information, influence how the informed viewer receives Wojnarowicz’s Arthur Rimbaud in New York?1

Courtesy of the Estate of David Wojnarowicz and P·P·O·W, New York.

The synergistic interplay between art and expository input is by no means limited to artistic visions of artists who have been shaped by tragedy or marginalization.7 Mark Gilbert’s 2019 exhibition, Seeing the Patient, at the Nova Scotia Museum of Natural History10 is an equally striking example of this coactive blending. Gilbert’s sheer talent for rendering portraits of physical and psychological anguish, combined with the deliberate shadings of his accompanying narrations on the reciprocity between patients and caregivers, adds immeasurably to how Gilbert’s artworks are understood.

There is, however, an ostensible difference between artists who draw heavily from their own traumatic histories and those who document the trauma of others. Artists who create works about themselves must grapple with ethical issues—such as disclosure and its ramifications—and the vagaries of autobiographical memory. The question of consent, on the other hand, looms largest with artists who are depicting others. Perhaps the best framework for addressing this ethical concern is through the lens of consent as it applies to compromised populations.11 In that regard, the collaboration between artists and their patient-subjects could ideally strive for consent that respects decision-making capacity, communication that is transparent and documented, and language that is forthright and accessible.

When looking at 2 paintings purportedly created by Rembrandt is there a difference in how they are experienced if we learn that one of them is a forgery?

If we assume that narrative input is the conduit for illuminating the endemic but partly intangible psychological sequelae of trauma that reside within artworks that relate to anguish, how, then, is this assumption relevant to a broadly conceived science of trauma? If the science of trauma was reducible to universal laws, qualitative knowledge emanating from artworks would be irrelevant, as would qualitative knowledge from individual psychological reactions to trauma and their quantitative measurement more generally. Value, however, is not necessarily synonymous with mathematical proof. The gathering of information and observations prior to the formulation of theories—inductive reasoning, as the case might be—is, one might argue, equally significant. The indubitable value of scrutinizing artistic visions of survivors and the compelling illustrations of documentarian artists thus rests largely on descriptive methodologies,12 which could offset dependence on axiomatic thinking when theorizing about the psychology of trauma and its health care implications.

To further highlight this point, the remainder of this paper introduces how the artistic practice of the second author (TLA) embraces emotional unravelling to dramatize the experience of shame, using an analogy as the emblematic linkage between trauma and shame.

Between the ages of 4 and 7, TLA was the victim of chronic sexual abuse by her father’s close friend, Gene Hartman. As TLA recounts, “Several years later, Gene killed himself. Shortly after his death, I [TLA] received a call from his wife Eleanor. He’s dead, she said, and it’s all your fault. My [TLA’s] troubled childhood got messier.”13

This narrative input, like that introduced previously, surely modifies how TLA’s artworks are now perceived. Her choice to name names (though both deceased) is no less calculated. Secrets, she believes, perpetuate crimes and protect perpetrators.

One way of interpreting the language of TLA’s 2017 sculpture, In Case of Shame, is through the lens of analogical thinking. It takes a source—a locked red metal safety cabinet with a glass window that holds a fire extinguisher used in emergency situations to control small fires—and then translates it into a target—which, in this case, is a custom-fabricated locked safety cabinet holding a sledgehammer that has been repurposed for the abatement of shame. Markedly pronounced side effects are duly noted, and the cracked glass speaks for itself.

The visceral impact of TLA’s sculpture goes beyond merely perceiving its constituent parts. What’s most striking about this piece is that viewers instantaneously grasp its meaning. A literal translation is unnecessary because the analogy works seamlessly. With an analogy, there is an intuitive disassembling and then an automatic reassembling. Here, what is disassembled—a safety cabinet holding a fire extinguisher—is recast as a safety cabinet holding a sledgehammer for rescinding shame. The cautionary label, “use may have unintended consequences,” fortifies the sledgehammer’s association with the destructive power of shame, often personalized as I can relate to that.14 This is not to imply, however, that the allegorical language of In Case of Shame is embedded solely in this analogy. The sledgehammer alone obviously has multiple connotations.

Approaching this theme from yet a different angle, TLA’s No Escape at All is an evocative psychological “portrait” that is both annotated and metaphorical. It is constructed of words trapped in an abyss, spiraling simultaneously outward and inward. The inner text comprises tortuous outpourings of humiliation, while the outermost ring repeats the aphorism, “I can’t escape this shame, which is no escape at all.” These artworks, In Case of Shame and No Escape at All, are best conceptualized as integral components of an overarching tableau that intuitively rails against the imperious fortress of shame.13,14

What, then, is our take-home message? Artworks representing creative visions that emanated from trauma and thereupon were vitalized by narrative input have a special place in the medical humanities by virtue of their power to integrate traumatic experiences and interpret them profoundly. For this reason, such artworks are especially critical to clinicians, because psychological traumas to patients can be deeply tumultuous but largely unarticulated. 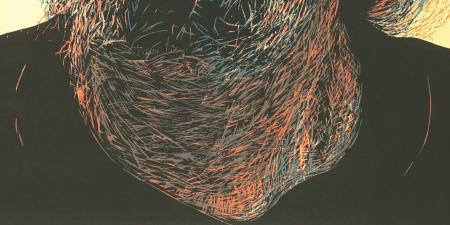 Anthony and the Role of Silence in Portraiture in Clinical Settings 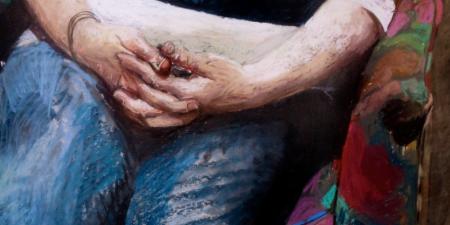